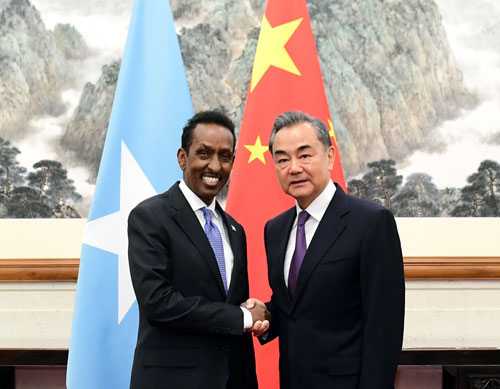 Wang made the remarks in a telephone talk with Somali Minister for Foreign Affairs and International Cooperation Ahmed Isse Awad on Wednesday night.

China was among the first countries to acknowledge Somalia’s independence, and Somalia was the first East African country to establish diplomatic relations with the People’s Republic of China, Wang said.

China and Somalia have all along shared mutual respect and treated each other as equals, and both countries have shared mutual understanding and support on issues concerning each other’s core interests, Wang said.

Noting that Somalia is a trustworthy good friend and brother of China, Wang said that Somalia is an important member of the Forum on China-Africa Cooperation, the China-Arab States Cooperation Forum and in the joint construction of the Belt and Road Initiative.

He said that China is willing to take the opportunity of the 60th anniversary of diplomatic relations between the two countries to implement the consensus reached by the two countries’ leaders and push China-Somalia relations to new highs.

Wang noted that since the COVID-19 pandemic broke out, China, despite mounting anti-pandemic difficulties domestically, has provided needy supplies to Somalia to overcome the adversity with the Somali people.

China is willing to work with Somalia to carry out the projects urgently needed in the peacebuilding of Somalia, including material aids and personnel trainings, and to explore more cooperation in areas including agriculture, fishery and health, he added.

Wang said that China will continue to encourage Chinese enterprises to invest and do business in Somalia, to help the country’s economic and social reconstruction.

In his part, Awad said that the two countries enjoy a profound traditional friendship, expressing gratitude to China for its valuable support and assistance to Somalia over the years.

The Somali side attaches great importance to relations with China, adheres to the one-China policy and firmly opposes “Taiwan independence”, Awad said.

The Somali side is ready to work with China to continue to implement the consensus reached by the two countries’ leaders, well organize the activities marking the 60th anniversary of the two countries’ diplomatic ties and strengthen cooperation in such areas as infrastructure, culture and people-to-people exchanges, promoting a continuous development of the bilateral relations, Awad added. Source:Xinhua