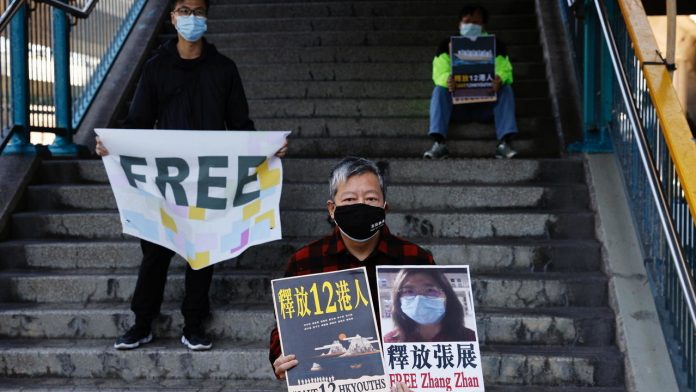 A Chinese court on Wednesday jailed ten democracy activists in Hong Kong for up to three years for the group’s order to flee the city by motorboat to seek refuge in Taiwan.

The group was arrested by the Chinese Coast Guard on August 23 on its way to the autonomous island, which has opened its doors to Hong Kongers amid growing violence against disagreement in Hong Kong.

The other eight were sentenced to seven months behind bars for illegally crossing the border.

Officials previously said that two minors from the so-called “Hong Kong 12” would be returned to Hong Kong after admitting wrongdoing.

The couple returned to town at noon on Wednesday.

The ten adults in the group first appeared in a court in the southern city of Shenzhen on Monday, but the trial – like many in China’s opaque legal system – was not open to foreign journalists or diplomats.

But the Yantian District People’s Procuratorate said it would not pursue its case against the two teenagers, the surnames Hoang and Liu.

The families of the accused were only informed of the date of the trial three days before the trial, while their lawyers were forbidden to appear in jail.

Lawyers on Wednesday said the verdicts were too heavy and the accusation of organizing a border crossing was not substantiated.

The United States on Monday called for the immediate release of the group, which it said was “fleeing tyranny”.

“Communist China will do nothing to stop its people from seeking freedom elsewhere,” a US embassy spokesman told AFP.

Part of the group was already facing prosecution in Hong Kong, where democracy activists last year led massive protests against the Beijing government, which has since been ousted by a tough new security law.