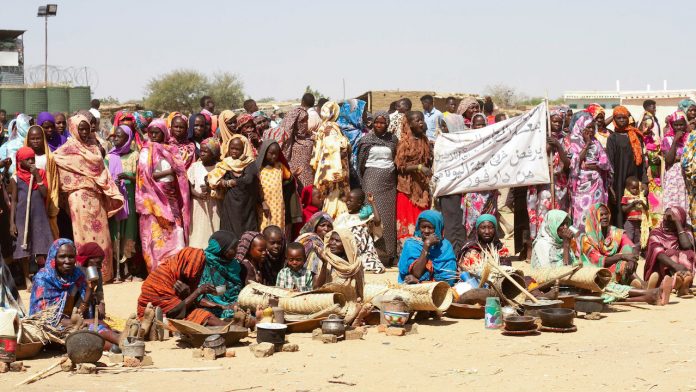 Clashes left 55 people dead in southern Darfur on Monday, after a separate round of violence in West Darfur reportedly killed 83 and displaced tens of thousands over the weekend.

It was the worst violence reported since the signing of a peace agreement in October, which observers had hoped would end years of war.

The bloodshed, which did not appear to involve any signatories to the deal, came just over two weeks after the UN / African Union peacekeeping force UNAMID ended years of operations.

While former rebels have pledged to lay down their arms, decades of conflict have left the vast, impoverished region redundant in arms and divided by bitter rivalries over land and water.

In southern Darfur, fighting broke out early on Monday between the powerful Arab Rizeigat tribe and Fallata, a cattle and camel herding people who trace their roots to Fulani in West Africa.

“The clashes between the Rizeigat tribe and the Fallata tribe have killed 55 people and injured 37 others,” local Fallata leader Mohamed Saleh told AFP.

Saleh said several homes were burned in the attack, which appeared to be revenge for the Fallata tribe’s killing of a Rizeigat member about a week ago.

The fighting in South Darfur comes after at least 83 people were killed in clashes between rival ethnic groups on Saturday and Sunday in El Geneina, the capital of the state of West Darfur.

On Monday, SUNA’s news agency West Darfur quoted the governor as saying that the number of deaths had not yet been confirmed as countless bodies remained in the battle.

The Save the Children aid group called on all sides to lay down their arms “before the situation gets out of control.”

The charity’s Sudan chief Arshad Malik said the wounded had overwhelmed health centers and that “we have seen disturbing images of injured and dying people on floors and corridors in hospitals”.

The group warned that “many children will have been separated from their parents and are now at risk of being exploited”.

The Sudanese authorities said they had sent a “high-profile” delegation to calm tensions.

The vast Northeast African country has undergone a delicate transition since the ouster of President Omar al-Bashir in April 2019 following mass protests against his rule.

The Sudanese Professionals Association, an umbrella group that led the protests against Bashir, said on Sunday that the violence showed “shortcomings” in the peace agreement and said it had failed to address the causes of the conflict.

Bashir, who is in custody and is on trial in Khartoum, is wanted by the International Criminal Court for alleged genocide and war crimes in Darfur.

Darfur endured a bitter conflict that erupted in 2003, leaving some 300,000 people dead and 2.5 million displaced, according to the UN.

The war had broken out when ethnic minority rebels arose against Bashir’s Arab-dominated government, which responded by recruiting and arming a notorious Arab-dominated militia called the Janjaweed.

The main conflict has abated over the years, but ethnic and tribal conflicts still flare up at regular intervals, which largely pits semi-nomadic Arab pastoralists against settled peasants.

On December 31, the UNAMID force formally ended its 13 years of operation in the region. It plans a gradual withdrawal of its approximately 8,000 armed and civilian personnel within six months.

In fear of deadly violence, Darfur residents protested at the end of December against UNAMID’s departure.

UN Secretary-General Stephane Dujarric called on the Sudanese authorities to “end the fighting”.

“The escalating violence between municipalities has resulted in many deaths and injuries, the displacement of nearly 50,000 people and the destruction of property,” he said in a statement.

Jan Egeland, Secretary General of the Norwegian Refugee Council, warned that the “ugly face of the war” could return to Darfur and demanded more help and protection.

The Sudanese Transitional Government, a power-sharing arrangement between generals and civilians, signed a peace agreement with rebel groups in Sudan’s main conflict zones, including Darfur, in October.

Gibril Ibrahim, leader of the rebel movement Justice and Equality, wrote on Twitter that the violence in West Darfur was “a human tragedy”.

Another rebel leader, Mini Minawi, called for the implementation of the peace agreement that called for “reconciliation” between the Darfuri tribes.

Two groups have refused to join the peace deal, most recently in a series of agreements, including the Sudan Liberation Movement (SLM) faction led by Abdelwahid Nour, which is believed to have strong support in Darfur.