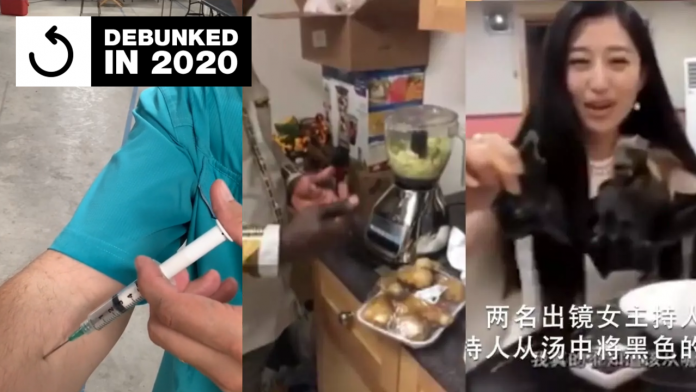 With Covid-19 dominating the 2020 news, many examples of fake and misleading images have surfaced online. JowharObserver teams have sorted through countless statements to separate facts from fiction. From rumors about the origin of the virus to the effects of wearing face masks, here are some of the most notable claims we unveiled this year.

Videos of bats soup reveal the source of coronavirus?

As Covid-19 began to gain global attention, Internet users began to suggest that eating bats was a possible source of the virus. Videos and photos of Asians eating bat soup began circulating widely on social networks, but the truth is that most of these videos were thousands of miles from China. In addition, there is no evidence to suggest that these videos were linked to the outbreak of the virus.

Our team found that some of these videos, allegedly from Wuhan, were actually recorded in Palau, Micronesia. In fact, bats soup is a traditional dish in the Pacific Ocean, but not at all common in Wuhan.

Read more about the observers >> Is bat soup a delicacy in China? We dismiss a rumor about the origin of the coronavirus

In April, we looked at an emerging conspiracy theory that claimed that 5G mobile networks had caused the Covid-19 pandemic. In the UK, the allegation led to harassment of telecom engineers and vandalism of mobile phone infrastructure.

Versions of this theory show that 5G electromagnetic waves poison cells in the body, creating the virus, while others say that the waves weaken the immune system, making people more susceptible to infection. Others say that viruses can be transmitted via radio waves or mobile networks, which explains the rapid global spread of Covid-19. But doctors, researchers, virologists and biologists have all rejected these claims.

Recipes claiming to ward off the virus are circulating in Africa

From the beginning of the Covid-19 pandemic, home remedies were shared to prevent the virus on social networks in Africa. Social media users shared bulbs of garlic, ginger and lemon that would probably cure the virus. We spoke to a communicable disease specialist who told us that there is no evidence that this mixture would cure Covid-19, even though garlic, ginger and lemon are beneficial for the immune system.

Other shared solutions such as steam inhalation, where a person inhales the steam from a hot liquid such as tea to fight the virus. Our expert told us that this cure can actually be more dangerous.

Coronavirus infects a person through their airways. It damages the lungs and can cause severe pneumonia. You should avoid anything that could adversely affect breathing. This type of inhalation can cause a person to cough or sneeze, which in turn can spread the disease.

In April, videos and posts tagged #FilmYourHospital shared images of empty hospital rooms and corridors, claiming the Covid-19 pandemic was exaggerated or invented. But these videos failed to show excessive intensive care units in many hospitals, not even the people who die from the virus.

Do face masks cause CO2 poisoning?

Although face masks have now become commonplace in many parts of the world, the Covid-19 pandemic began fierce debates about practice, both online and offline. Some opponents of face protection claimed that masks can actually be lethal by capturing carbon dioxide as we exhale and causing suffocation.

However, we spoke to experts who told us that although the levels of CO2 can increase when wearing a mask, they will not reach levels that are harmful to the body. In addition, several doctors online demonstrated that mask wear does not affect the level of oxygen in the blood.

In Brazil, the South American country most affected by the coronavirus pandemic, Internet users claimed that the virus was exaggerated by officials by sharing pictures of empty chests. However, Brazilian verification and factual contacts found that these images of so-called empty coffins were all misleading or taken out of context.

Since the beginning of the pandemic, about 30 fake quotes from international public figures have been spread on Congolese Facebook pages. It turns out that all these quotes and posts were falsified by a few individuals who hoped to create a “buzz” on social networks.

The false quotes were addressed to senior officials such as WHO Director – General Tedros Adhanom Ghebreyesus, French President Emmanuel Macron and Madagascar President Andry Rajoelina. Our team was able to contact one of the administrators on these Facebook pages. A 20-year-old student told us that he and some of his friends “make up stories to gain followers.”

Three examples of fake posts that went viral that were shared on the Facebook page “V É RIT É”. The posts were deleted on May 9, but the site was still online from that date. © Observers

Read more about the observers >> Who is behind the fake news campaign around Covid-19 in DR Congo?

With the approval and distribution of the Covid-19 vaccine in several countries, false news about the vaccine’s potential side effects has made the rounds on social media. Politicians in many countries – such as President-elect Joe Biden and Israeli Prime Minister Benjamin Netanyahu – received the vaccine in front of cameras or on live television to increase public confidence in the vaccine. But some online rumors claim that these vaccinations were fake.

Several online users have shared videos of politicians who appear to be receiving the vaccine with the cap still on the syringe or claim that needles (such as those used in movies and television) were actually used.

Read more about the observers >> Did celebrities and politicians just get the Covid-19 vaccination?