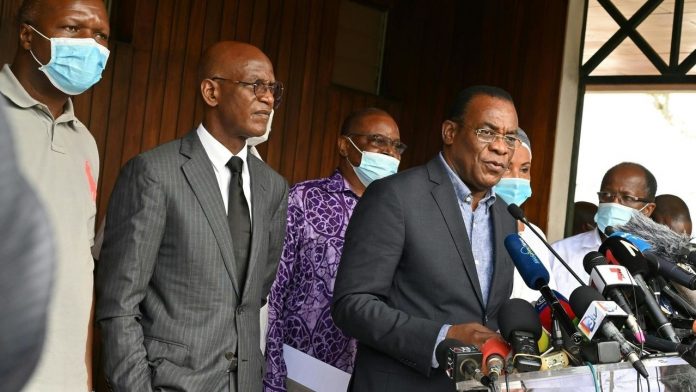 Ivory Coast opposition leaders said on Monday they were setting up a ‘transitional government’ after boycotting a weekend election in protest of President Alassane Ouattara’s bid for a controversial third term.

The movement deepens a crisis that erupted in August when Ouattara said he would run again, to the rage of the opposition, calling it a constitutional violation and an “election coup” in the West African country.

“Opposition parties and groups are announcing the creation of a National Transitional Council,” Pascal Affi N’Guessan told reporters. “The mission of this council will be to … create a transitional government within the next few hours.”

There was no immediate reaction from the government over the opposition’s latest announcement, which raised efforts in the standoff over the election.

Abidjan, the country’s economic capital, was calm on Monday with no signs of protests and it was not immediately clear what next steps the opposition planned to take.

Opposition figures had already rejected Saturday’s vote as a failure, calling for a “civilian transition” from Ouattara’s government, which provoked a harsh warning from his ruling party against trying to create unrest.

Pre-election clashes killed at least 30 people and opposition protests sparked fears of a repeat of the 2010-2011 crisis, when 3,000 people died after then-President Laurent Gbagbo refused to accept defeat at Ouattara.

Ouattara, a former IMF economist, appeared for re-election on Monday with preliminary results pointing him forward, which was expected given the opposition’s boycott of the vote.

Electoral officials were still voting on the results and it was not clear when the final count could be announced.

N’Guessan said the Transitional Council would be led by opposition veteran Henri Konan Bedie, a former president and longtime opponent of Ouattara whose rivalry has shaped Ivorian politics for decades.

The anger unleashed by Ouattara’s third term has revived memories of previous Ivorian feuds with roots, even before a civil war in 2002 split the country in two, north and south.

Tensions in Francophone West Africa’s top economy are the latest challenge for a region where Guinea is embroiled in a post-election dispute, Nigeria emerges from widespread unrest and Mali from a coup.

Pockets of unrest, some vandalized polling material and closed polling stations were reported mostly in opposition strongholds during Saturday’s election.

But competing factions gave conflicting reports on the extent of the boycott. The government called them isolated.

Tensions were still high in Daoukro, an opposition castle 235 kilometers north of Abidjan, where protesters had set up barricades on election day to block roads.

“We are on guard and waiting for the results,” said General Aime, a local opposition activist.

An observer mission from the African Union said on Monday that the election was “generally satisfactory” despite a lack of agreement.

In contrast, the American watchdog Carter Center said “The overall context and process did not allow for a truly competitive choice.”

“The process excluded a number of Ivorian political forces and was hampered by an active boycott,” it said in a statement issued by the South African-based Electoral Institute for Sustainable Democracy in Africa (EISA).

The Ivorian leader says a constitutional court ruling approved his third term, allowing him to reset the country’s two-pronged presidential border thanks to a 2016 reform.

Bedie (86) and other opposition leaders have also accused the Electoral Commission and the Constitutional Court of favoring the government, making it impossible to vote.