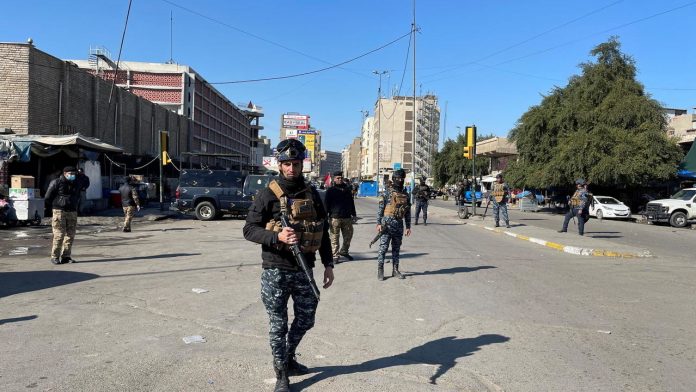 A rare twin suicide bombing on a busy commercial street in the heart of Baghdad on Thursday killed at least 28 people and injured more than 70, according to Iraqi officials, in an attack that broke months of relative calm.

The first suicide bomber had rushed into the market, claiming he was feeling sick, so that people would gather around him, according to an Iraqi interior minister. He then detonated his explosives.

As people gathered around the victims, a second attacker detonated his bomb, the ministry said in a statement.

There was no immediate claim of responsibility for the attack.

An AFP reporter at the scene said the bomber had struck a huge outdoor market for used clothes in Tayaran Square.

It had full of people after almost a year of restrictions imposed in an attempt to stop the spread of Covid-19.

Security forces cordoned off the area and paramedics worked to help the injured.

Interior Ministry spokesman Khaled Al-Mhanna said the first bomber claimed to be ill and asked for help, gathering a crowd around him before detonating. The second was blown up as people tried to help the victims of the first bombing. #Bagdad, Iraq

The period of relative calm broken

In January 2018, more than 30 people were killed in a suicide bombing in Tayaran Square, just a few months before the last parliamentary elections.

Elections in Iraq are usually preceded by escalating violence, including bombings and assassinations.

Iraq is preparing for a new parliamentary election this year, which Prime Minister Mustafa al-Kadhemi originally called for June – almost a year ahead of schedule – in response to widespread protests in 2019.

But the authorities are in talks to reschedule them for October to give the electoral authorities more time to register voters and new parties.

Thursday’s twin attack was not immediately claimed, but suicide bombings have been used by ultra-conservative Islamist groups, most recently the Islamic State.

Iraq declared that the IS group was defeated at the end of 2017 after a fierce three-year campaign to retake the third of the country that had been seized by the jihadists.

But the group’s sleeping cells have continued to operate in desert and mountain areas, usually focused on security forces or state infrastructure with low attacks.

Nevertheless, the US-led coalition that has supported Iraq’s campaign against IS has significantly reduced its troop levels over the past year, citing the increased capacity of Iraqi troops.

They are primarily responsible for training, drone surveillance and carrying out air strikes, while Iraqi security forces handle security in urban areas.