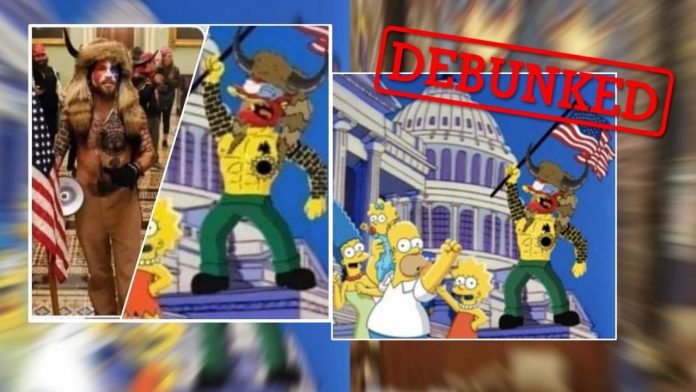 Social media users have shared photos they say show how the iconic cartoon The Simpsons predicted the storming of the US Capitol building by extremist supporters of President Donald Trump on January 6, 2021. Many pointed to the similarities between an animated character and Jake Angeli , one of the rebels who stormed the Capitol. Angeli’s origin – he had an animal skin and horns on his head – gave him a place on front pages all over the country. But the image attributed to The Simpsons is actually a photo montage and was never shown on the show.

Back in the summer of 2020, some social media users claimed that the popular cartoon The Simpsons had predicted the protests against police violence and racial justice that swept the United States after police killed George Floyd in Minneapolis. Now some claim that The Simpsons also predicted the storm on the Capitol on January 6. Surprised users have shared a picture showing The Simpsons standing in front of the Capitol next to a person draped in the American flag and wearing animal skin and horns on his head.

The suit looks strikingly similar to the one worn by the rebel Jake Angeli when he took part in the riot at the Capitol. Because of this similarity, many social media users have shared the image and hailed the creators as visionaries who predicted the uprising.

Social media user Novello Vladimiro praises the creators of The Simpsons as visionaries for, as he sees it, predicting the riot at the Capitol.

It turns out, however, that this image is a photo montage of three different images created by an unknown person. It is not an excerpt from the animated series at all.

The first image used in the photo montage shows only the Simpson family. If you crop the image to show only the family, you can run the cropped image through a reverse image search (see how by clicking here) to see the first time the image was published online.

This is one of the original images used in the photo montages. © https://avatars.mds.yandex.net/

Using the same reverse image technology, we discovered that the background image of the Capitol building is from episode 2 of season 3 of The Simpsons. The picture was turned in the last montage.

This is the background image used for photo montage. © https://simkl.com/

Then we used the same technique and cropped the image so that it only showed the man wearing animal skin and then ran it through a reverse image search. We discovered that the original image comes from the video game “The Simpsons: Springfield” and is called “Bare Chested Willie.” The character is displayed in exactly the same position and posture on Simpson’s fan sites.

This photo was used in the photo montages. © https://les-simpson-springfield.fandom.com/

Although this image does not actually come from The Simpsons, it is true that the creators of the show had some clarity when analyzing the state of American society. Their episode from November 1 last year imagined the end of Donald Trump’s term.

In the episode, Homer forgets to go and vote in the election. As a result, on January 20, Homer’s inauguration day, Homer must fight the robots that have taken control of the city of Springfield – a reference to the chaos they thought could follow the US presidential election.