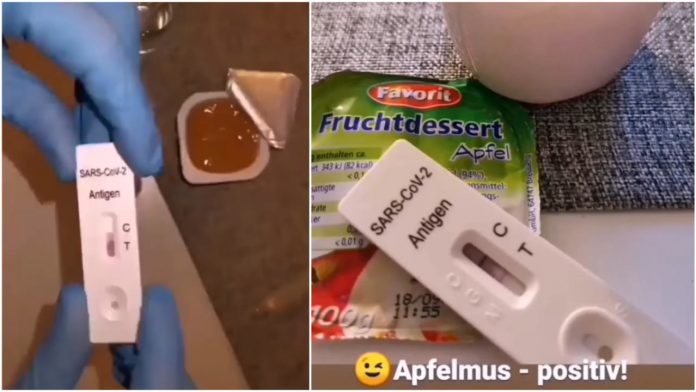 A video claiming that antigen testing is not an effective way to detect Covid-19 has been circulating online since early December. The video shows that the test is performed on a container with apple sauce, which tests positive. From this video, a number of social media users concluded that the test was unreliable and thus that the number of cases of Covid-19 had been exaggerated. But these people jumped to this conclusion a little too fast. It turns out that this test was done for use on humans, not food – hence the unfortunate result.

The video, which runs for 2 minutes and 15 seconds, has received hundreds of thousands of views on Facebook, Twitter, Telegram and Instagram since it first began circulating on December 8. The social media that shares it claims that the video shows a container of apple sauce testing positive for Covid-19 using an RT-PCR test [Editor’s note: the most effective test] as well as a newly developed antigen test that gives faster results but which the French authorities have concluded is less effective.

“This apple sauce tested positive during the test,” says this comment, which was left on Facebook on December 8. This is the oldest instance of online video our team could find. It received more than 200,000 views.

If you look closely at the video, you will see that it consists of several different images edited together.

The first shot shows a person wearing gloves using a test from MEDSan, which is the name of a German start-up that manufactures various tests. The MEDSan website lists a variety of tests, including the antigen test used for this experiment.

How the test works is explained in different languages ​​and in a video on the MEDSan website. Essentially, the sample is diluted and evaluated in a liquid and then placed on a stick. Whether the substances have been tested positive or negative is expressed by different colored bands.

The documents on the website explain that if the subject is positive, you will see two bands appear (the C-band and the T-band). Many social media users who had read this guide pointed out that in the first shot of the video, only the C-band is shown, which they say indicates a negative result.

Twitter user @YoughsD posted the answer on the video. The tweet says (in French): “This is not a PCR test, it is a genetic test (it is written below) and it is negative. Go ahead. “© Twitter

Other social media users commented that there seemed to be a very weak line next to the T-band, which may mean that the test was actually positive, as the MEDSan website said that a weak or weak line should be interpreted as a positive result.

These screen grabs show the end of the video, where you can see a very faint line next to the letter T. We circled it in pink for emphasis. © Facebook

This very light second line does not appear in the first shot of the video, only in the second video sequence and then a photo shown at the end. The same test model is shown in each sequence but it is possible that the test was replaced with another for the later shots. However, we cannot prove this with certainty.

Our team contacted MEDSan, who confirmed that the two lines, including the weak one on the T-band, really showed a positive result for Covid-19.

In this image from the manufacturer, you can see what a positive result looks like on their fast antigen test for Covid-19. © MEDsan GmbH Germany

In the picture below, which the manufacturer shared with our team, you can see a number of positive results. The lines are displayed with varying degrees of intensity but all are positive. The two results towards the bottom show approximately what you see on the test at the end of the video.

Does this test indicate that apple sauce is infected with Covid-19?

Antigen tests were developed and manufactured to detect the virus in humans using samples taken from a nasal or sometimes oral stick. They were not designed to absorb other substances, which may affect the test process, resulting in false positives or false negatives.

Our employees at AFP Factuel contacted the manufacturer MEDSan, who performed a series of tests with other “irrelevant” materials, including cherry jam, an alcohol-based disinfectant, apples, apple juice and window cleaners. The cherry jam and disinfectant gave positive results when tested.

These images show the results of a Covid-19 antigen test used on a variety of materials by the manufacturer MEDsan. This photo was shared with AFP on December 9, 2020. © MEDSan Gmbh Germany / AFP

AFP interviewed two researchers who said that there are some explanations for these results, including the acidity level. The pH of the sample is usually neutralized in a solution that accompanies the test. But according to Annette Beck-Sickinger, professor of biochemistry, this solution is not calibrated “to neutralize highly acidic foods such as apple or mango”.

Professor Thomas Decker said that it is impossible to say how effective a test would be on humans by testing it on a food: “The test was designed to combine antibodies and antigens under specific conditions, conditions that are disrupted by the presence of food. as if we were filling a car’s gas tank with gas and expecting it to move forward. ”

In summary, it is impossible to know from this video if the apple sauce in the video really contained traces of the virus or if the test was disturbed by the acidity level or the sugar in the apple sauce or some other factor. With that said, according to several specialists quoted by AFP, it is impossible to get a reliable result when you use this test that was developed to test the presence of the virus in the human body on a food. This also means that an experiment with food provides information about the reliability of this test on a human.

There was probably a political agenda behind the widespread sharing of this video. The video uses eye-catching music, lyrics and graphics. It is also in German, which gives us a good guess as to its origin.

Faced with a sharp increase in the number of cases and deaths during the second wave of the pandemic, the German government decided at the end of November to extend the restrictions and tighten them on 13 December. This decision was extremely popular among some groups who have questioned the reliability of these figures and thus the tests.

The right-wing movement AfD (Alternative for Germany) is leading the campaign against the vaccine and other health problems, including social distancing. A youth group within the party posted a meme [Editor’s note: a funny photo montage often with text] make fun of “quick tests” along with a picture of apple sauce.

In this tweet, the AfD youth group uses the image of a glass of Coca-Cola, which is used in a similar experiment by a right-wing Austrian parliamentarian. © Twitter

The video was widely shared on Telegram, an encrypted messaging service. These channels, such as “NRW News” and “Wake up”, share pro-Trump, anti-vaccine and conspiracy theories in German to hundreds of followers.

Michael Schnedlitz, an Austrian MP from the far-right FPÖ movement, carried out a similar demonstration with an antigen test on Coca-Cola, which gave a positive result. Schnedlitz claimed that these tests were useless and that the government had set up a kind of “light dictatorship” during the Covid-19 pandemic.

The MP is holding a quick test of the manufacturer Dialab. © Facebook

The manufacturer of the test in question, Dialab, said that Schnedlitz had not followed the correct procedure. To emphasize their point, they posted a video on Facebook that showed that the result would be negative if the test was performed properly.

In the caption of this video, the manufacturer explains that Schnedlitz did not dilute Coca-Cola with the special solution used to neutralize its high acidity. The acidity “destroyed the antibody proteins in the test”, which led to a positive result. According to the manufacturer, all other similar tests carried out by another manufacturer would also have given a false positive in these circumstances. In his own counter-experiment, an employee of the manufacturer mixed the effervescent beverage with the neutralizing solution and obtained a negative result.

“These tests should always be performed by hospital staff or people trained to administer them to avoid this type of result or presentation,” says the manufacturer.