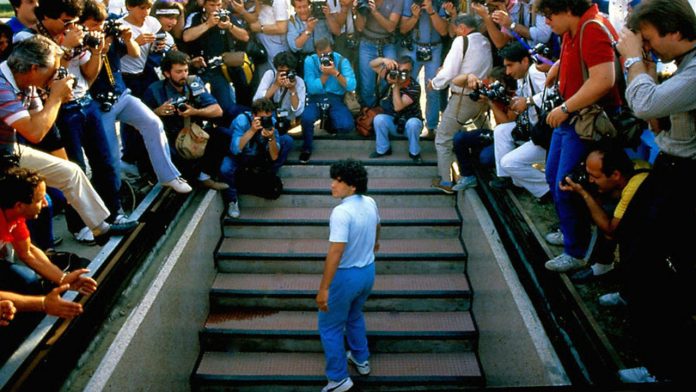 One of the sport’s most cinematic (anti) heroes, Diego Maradona died of a heart attack on Wednesday, aged 60. His rise and fall was the subject of a documentary by Asif Kapadia, the third and final part of a trilogy about prodigies who fought with fame.

The location is on June 22, 1986 at the Estadio Azteca in Mexico City. On a sparkling afternoon, 114,000 dazzling fans have just witnessed Maradona scoring the biggest goal in World Cup history – and the Argentine commentator is growing lyrically.

“Cosmic dragon, what planet are you from that you can leave so many Englishmen in your wake?” sportscaster yelps, crying with joy over a feat celebrated over Argentina as revenge for the Falklands War. “Thank God for football and for Maradona!”

Maradona’s glorious drive past England’s unfortunate defender is a legendary thing, the other in fame for the goal he scored a few minutes earlier with his hand – “God’s hand”, when he minted it. The outrageous one-two, who sealed Argentina’s quarter-final over their bitter rivals, would define his career: the brilliance and the trick, the prodigy and the myth.

The extraordinary case of Dr Diego and Maradona is the subject of a documentary by Britain’s Asif Kapadia, who appeared out of competition at the Cannes Film Festival last year.

The director has described “Diego Maradona” as the third and final part of a trilogy about prodigies who fought with fame. It followed “Senna”, his documentary about the race car driver who died at 34 in a crash, and Oscar-winning “Amy”, about singer-songwriter Amy Winehouse and her tragic death at 27.

Maradona ultimately survived them both, by a considerable margin, but for the past three decades, his life seemed to hang in the balance.

‘I’m looking for glory, not money’

One of the sport’s most cinematic (anti) heroes, the Argentine footballer, was something of a Cannes habit in itself. In 2015, a Maradona lookalike played in Paolo Sorrentino’s “Youth”, a meditation on aging. His juggling screen, which bounced a tennis ball with still agile feet as he released his huge belly around the court, was a joy to watch. The man himself hit the red carpet years before for a screening of Emir Kusturica’s cinema film “Maradona by Kusturica” ​​- which, as the title suggested, was as much about the director as the football player.

With Kapadia, Maradona’s remarkable life is in more reliable hands. His documentary focuses on the football player’s Neapolitan years, from his arrival as a savior to his cocaine – driven downfall.

“I’m looking for glory, not money,” said a still young Maradona as he left powerful Barcelona for Italian backward Napoli in the summer of 1984. The Italian club has never won a title and its city and people are the butt of all racist jokes in the country ( to this day, rival fans still mock them with songs of “Vesuvius, wash them with fire”).

Maradona’s transition was an unpleasant career move, unthinkable today. But El Pibe de oro (the golden foot) and Naples proved to be a perfect match with the same humble origins, the same intoxicating passion and the same rebellious streak. Maradona soon lifted the team’s fortunes and restored the city’s pride – thus becoming a hero, a saint and a god.

Kapadia’s film opens with breathtaking images of Maradona’s first arrival at San Paolo Stadium, filled with 85,000 insane fans. The pandemonium is exciting and overwhelming, as is the two-month-long rump that follows Napoli’s very first title win three years later. Never before has a sports star aroused such levels of devotion and hysteria (at one point, a nurse takes a sample of her blood to a local church to mix it with relics from San Gennaro, the city’s patron saint).

But the back of fame and the dark side of Naples soon end up on him. He has a child out of wedlock (which he refuses to recognize), visits the Camorra (the local mafia) and becomes a cocaine addict. And when Argentina knocks Italy out of the 1990 World Cup at San Paolo Stadium – of all places – the country turns on him. He is a fallen god and the backlash is evil.

Kapadia has revealed an extraordinary wealth of documentary material, from black-and-white images of Maradona as a little boy hitting a ball around the slums of Buenos Aires to an audio recording of his phone conversation with his excited mother shortly after Argentina won the World Cup.

His film follows a well-known pattern that distinguishes Diego – the shy, insecure and good-natured child who supported his family from the age of 15 – and Maradona – the god-like public figure he became. A beautiful tribute to the most exceptional football player of all time, it will leave viewers dazzled by football, passion and aura, but longs to dig deeper into the man’s inner worries.