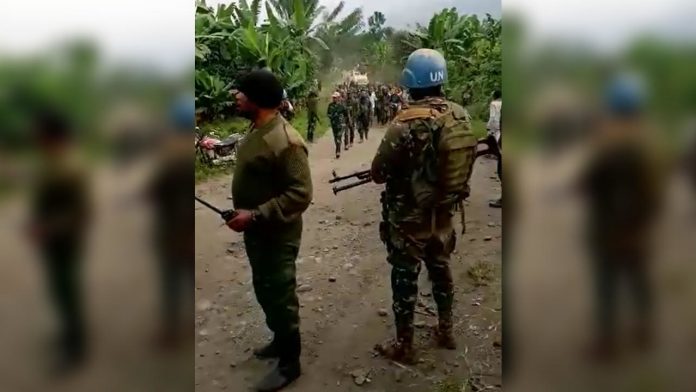 In recent months, people in the Congolese city of Mutwanga have been terrorized by a series of horrific attacks by the rebel group, the Allied Democratic Forces (ADF). This rebel group, which started in Uganda, has been active in this part of the Democratic Republic of Congo since 2014. They often target Congolese army posts and have largely prevailed. A video filmed on February 11 shows the army displaying the body of a slaughtered rebel – an attempt to assure the local population that they really have the situation under control.

The video, which was widely shared on WhatsApp, shows a group of men carrying a body tied to pieces of wood and wearing military equipment. An audience cheers and applauds as the men pass. Troops from the UN peacekeeping mission in the Democratic Republic of Congo, Monusco – easily recognizable from their blue helmets – are watching without taking action.

The incident took place on the morning of February 11 in Mutwanga, a city near the border with Uganda that is home to both a Monusco base and a base belonging to the Armed Forces of the Democratic Republic of Congo (FARDC).

Mutwanga is the capital of the northern Kivu province in the eastern part of the Democratic Republic of Congo. It is located about 50 kilometers from the town of Béni.

The night before the video was taken, the city was attacked for the fifth time by the rebel group Allied Democratic Forces (ADF). This rebel group, which is largely made up of Ugandan fighters, has pledged allegiance to the Central African province of the Islamic State. Congolese soldiers were able to push back the rebels, killing one and capturing two others, according to Radio Okapi, which is funded by the United Nations.

‘We thought the ADF rebels were invincible’

Ricardo Rapenzi, the director of the local radio station Ruwenzori Voice, witnessed the body at the exhibition. He told Jowharobservers what he saw:

The incident took place several meters from the Mutwanga military base, which is adjacent to the Monusco base. It’s the body of an ADF rebel who was killed by the army as you see in the video. He was found near a tomb in the village of Kakalali, about three kilometers from Mutwanga. The ADF fighters had retreated there. His comrades wanted to bury him according to Islamic tradition but the army won over them and they had to abandon him.

The locals showed up in large numbers to see the body of the ADF fighter – they wanted to be sure that the army had really gained the upper hand in the fighting the night before. Very often the rebels do better over the soldiers. And when they do so and sweep into the villages in large numbers, they plunder and plunder, take goods, goats and food. Nobody stops them.

As a result, we see the rebels as invincible. Every time the army says they have stopped an attack or killed a certain number of rebels, the locals do not believe it because they do not see the bodies of the dead. People here often believe that the army is talking but do not provide evidence for their military achievements.

The army allowed people to get close to the body and even wear it as a way to restore confidence.

‘We let the locals get the body’

Jowharobserver teams contacted Lieutenant Anthony Mwalushayi, the spokesman for the Congolese army in Béni. He confirmed that the incident had indeed taken place and added that the rebel’s body had been taken to the military camp and handed over to the Red Cross, which would be responsible for the funeral. Jacques Katshishi, Secretary General of the Red Cross in DR Congo, confirmed this.

On the night of February 10, we managed to repel the ADF’s rebel attack on our positions, just outside the city. There were violent battles. This body was found next to a graveyard because ADF fighters usually try to never leave the bodies of their commanders on the battlefield.

We transported the body to Mutwanga, where most of the locals live. When we got to town, we let the locals get their bodies so that they would realize that the rebels had really lost.

This is important because the locals do not believe in the statements of the army. It is extremely difficult to convince them if they have not seen the actual bodies of the dead. Many have fallen for false news claiming that the army is involved in the uprising, especially since many rebels are carrying military fatigue. However, that is not true.

The army is doing a lot to bring down the ADF. But our biggest difficulty is getting information about the enemy, which easily blends into the locals. Today, the ADF threat is only at the Ugandan border, in hard-to-reach zones.

>> Read about the observers: What do we know about the Islamic State group in DR Congo?

The ADF began in Uganda as a rebel group hostile to Ugandan President Yoweri Museveni. They withdrew to the eastern part of the Democratic Republic of Congo in 1995. This armed group, one of the most violent in the region, is accused of killing about a thousand civilians in the Béni region since October 2014.