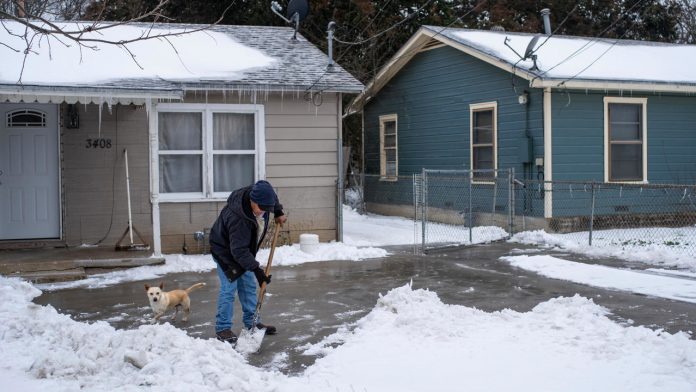 A deadly winter weather system that brought record-breaking cold to the southern and central United States and knocked out millions in oil-rich Texas covered the east coast in snow Thursday and disrupted coronavirus vaccinations.

The historic free explosion over the past week has seen the Arctic cold cover much of the American sun belt that is unfamiliar with such extremes, leaving dozens dead in the wake and millions of Texans told to boil water before consuming it.

On Thursday, a “major” winter storm hit an area that stretched from Virginia up to the northeast, causing icy structures and “treacherous” travel conditions, according to the National Weather Service.

The snow fell steadily over New York City all day, forcing the cancellation of about 200 flights and delaying the opening of two Covid-19 vaccination sites after the storm interrupted dosing delivery.

At 16:50 (2150 GMT), meteorologists had recorded more than ten inches of snow in lower Manhattan.

The big apple has already been covered by the white things twice this winter during two separate storms.

“Occasional snowstorms are always good, but as we approach March it gets a little tiring. I am ready for it to get hot again, says the 18-year-old student Kara Dickson.

A weather warning was in effect in New Jersey, where Gov. Phil Murphy announced the temporary closure of several vaccination sites.

“This could result in many meetings having to be relocated,” he said.

Across Texas, which has been hardest hit by the cold, power companies gradually restored power, but more than 350,000 homes and businesses were left without electricity late Thursday afternoon, according to PowerOutage.us.

Texas power companies implemented rolling outages to avoid network congestion as residents turned up the heat. The increased demand came when production capacity decreased due to the freezing of power plants and wind turbines.

David Hernandez, 38, spent the night in a church in Houston with other people who had fled their homes.

“My car ran aground and I tried to sleep in the car but it was just too cold. I had to come here, he said.

The Texas authorities opened about 300 emergency heating plants throughout the state.

Along with the misery, thousands of Houston residents were also affected by the water pressure.

Nearly seven million Texans were advised to boil their water before drinking it or using it for cooking, said Toby Baker, head of the Texas Commission on Environmental Quality, adding that nearly 264,000 people were affected by non-operational water systems.

Texas misery has sparked outrage in the Lone Star State, the only one of the 48 continental states in the United States to have its own independent power grid.

Anger escalated Thursday after it was revealed that Texas Senator Ted Cruz had flown to the Mexican resort of Cancun during the crisis.

Texas State Rep. Chris Turner told CNN about Ted Cruz: “As far as I’m concerned, it would be good if he stayed in Cancun. He does nothing for us in Texas or Washington, so I do not know when he will return. “

When political rivals demanded his resignation, Cruz justified the flight by saying that his one-night stay was to leave his children before flying home.

Here is the video of Ted Cruz from today who says that his daughters asked him “yesterday” if they can go to Cancun. So according to Cruz, on Wednesday the daughters asked to fly to Cancun, the senator agreed to buy tickets, they were all tested and flew out the same day? pic.twitter.com/ALyQkqUDmg

Despite the fact that the Arctic air mass began to loosen its grip in Texas and elsewhere in the south, the NWS said that cold temperatures would continue.

Biden was forced to postpone until Friday a visit to the Pfizer Covid-19 vaccine production facility in Kalamazoo, Michigan, while the federal government office in Washington was closed on Thursday.

The mayor of Los Angeles announced that 12,500 people would have their vaccinations scheduled for Friday postponed due to dose delays.

More than 30 storm-related deaths have been reported by US media since the cold weather came last week, many in traffic accidents.

Houston police said a woman and a girl died of carbon monoxide poisoning after sitting in a car in a garage with the engine running to stay warm.

Emergency medical services around Texas said dozens of others have been treated for suspected carbon monoxide poisoning.

A dozen animals – including a 58-year-old female chimpanzee – died during the freeze at the Primate Primates Rescue Sanctuary near San Antonio, the organization said on its website.

The winter storm has caused at least four tornadoes, according to Atlanta-based weather.com, including one in North Carolina on Monday that killed at least three people and injured 10.