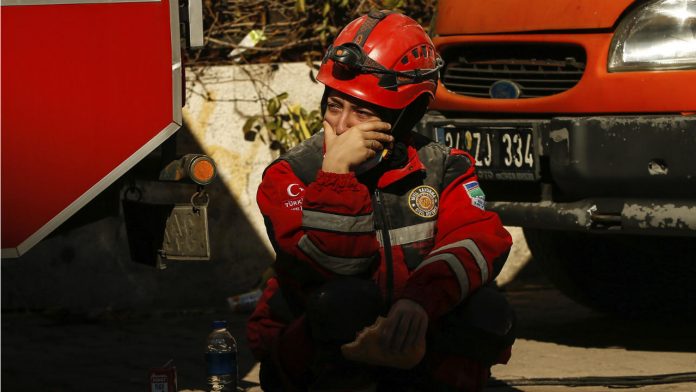 The death toll from a powerful earthquake that hit western Turkey rose to 100 on Tuesday, the country’s disaster authority said.

The magnitude 7.0 earthquake also injured 994 people, the agency reported under its Turkish acronym AFAD, with 147 still in hospital.

It added that rescue workers in Izmir province continued to search tirelessly in five buildings for an unknown number of missing persons.

The worst-hit Turkish city was Bayrakli in Izmir, where there was a mix of partying and sadness on Monday after a three-year-old girl named Elif Perincek and a 14-year-old named Idil Sirin were rescued from the rubble.

But both lost a sibling to the disaster that struck Friday afternoon in the Aegean Sea.

Two teenagers on their way home from school were also killed in Greece.

Turkey has reported 1,464 aftershocks following the quake, including 44 that were more than four in magnitude.

After dozens of buildings were damaged and at risk of repeated tremors, thousands of residents were forced to spend a fourth night in tents in Izmir.

The quake is the deadliest in Turkey this year after another disaster hit the eastern provinces of Elazig and Malatya in January, killing more than 40 people.

The country is crossed by fault lines and is prone to earthquakes. More than 500 people were killed in an earthquake in 2011 in the eastern city of Van.