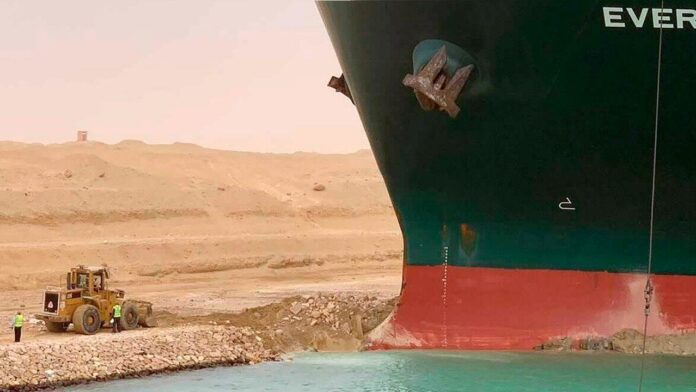 The owners of a giant container ship blocking the Suez Canal said on Thursday that they were facing “extreme difficulties” in retrieving it, prompting Egypt to suspend navigation through one of the world’s busiest shipping lanes.

The Suez Canal Authority (SCA) said it was trying to escape the Panama-flagged MV Ever Given, a 400-meter-long ship that swerved off course and ran aground in a sandstorm on Tuesday.

The Japanese ship rental company Shoei Kisen Kaisha said it owned the giant ship and was facing “extreme difficulties” in trying to escape it.

“In collaboration with local authorities and Bernhard Schulte Shipmanagement, a ship handling company, we are trying to float (the ship), but we are facing extreme difficulties,” said Shoei Kisen Kaisha in a statement on her website.

“We apologize for causing great concern to ships in the Suez Canal and those planning to cross the canal.”

As maritime specialists warned that it could take days or even weeks to surrender the ship, the Suez Canal Authority announced that it was “temporarily suspending navigation”.

Maritime sources told AFP on Thursday that a new dredger had been deployed to speed up the operation while northern convoy ships remain docked in the canal’s waiting areas.

“We have never seen anything like it before,” said Ranjith Raja, a researcher in oil and shipping in the Middle East at the international financial company Refinitiv.

“It is likely that the congestion … will take several days or weeks to sort out as it will have a depressing effect on other convoys.”

Broker Braemar warned that if tugs could not move the giant ship, some of its cargo might need to be removed with a crane barge to re-run it.

“This can take days, maybe weeks,” it said.

The ship’s chief, Bernhard Schulte Shipmanagement (BSM) in Singapore, said its 25 crews were unharmed and that the hull and cargo were undamaged.

A MarineTraffic map showed large clusters of ships circling while waiting in both the Mediterranean Sea in the north and the Red Sea in the south.

Historic sections of the canal were reopened in an attempt to ease the bottleneck, with dozens of ships waiting at both ends of the waterway.

The waterway drastically shortens the journey between Asia and Europe because it prevents ships from having to navigate around the southern Cape of Good Hope.

The Singapore-to-Rotterdam route, for example, is 6,000 km (3,700 miles) and up to two weeks shorter than walking around Africa.

It is an “absolutely critical” route because “all traffic coming from Asia passes through the Suez Canal,” says Camille Egloff, a maritime specialist at Boston Consulting Group.

Nearly 19,000 ships passed through the canal last year, transporting more than a billion tons of cargo, according to SCA.