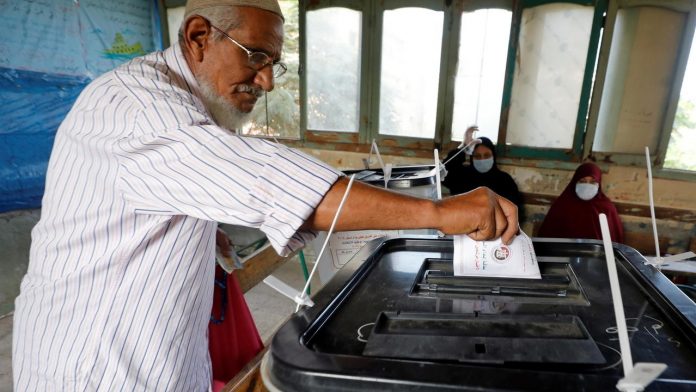 Egyptians began voting Saturday in the first phase of a parliamentary election, a vote likely to produce a toothless house of representatives filled with supporters of President Abdel Fattah al-Sisi.

The election comes as the Arab world’s most populous country faces a slight increase in coronavirus cases, and authorities warn that another wave of pandemics is ahead.

Like the Senate election in August, the Egyptian electoral authorities said face masks would be distributed free of charge to voters and polling stations were disinfected.

About 63 million eligible voters are eligible to vote in the two-stage election, with results announced in early December. Electoral authorities reiterated previous warnings that those boycotting the vote could face a fine of up to 500 Egyptian pounds (€ 26.83).

A total of 568 seats are in place, with over 4,000 candidates vying as individuals vying for 50 percent of the seats. Prominent, wealthy government-associated power brokers have an advantage.

The other 50 percent of the house’s seats are reserved for over 1,100 candidates running on four party lists. Al-Sisi will name 28 seats or 5 percent, bringing the total number of seats in the chamber to 596.

The first voting phase took place on Saturday and Sunday in 14 of Egypt’s 27 provinces, including Giza and the Mediterranean port city of Alexandria. Egyptian foreigners abroad voted earlier this week.

Voting in the country’s 13 other provinces, including the capital Cairo and the two provinces on the Sinai Peninsula, will take place on November 7-8. Each step in the poll is followed by runoff selections.

The final results will be announced in December, and the new chamber will hold its opening session shortly thereafter.

No formal political opposition to al-Sisi

The vote takes place in the midst of an atmosphere in which public criticism of the government is strongly discouraged. Most Egyptian media support al-Sisi and regularly criticize critics as traitors or supporters of the banned Muslim Brotherhood, which has been officially designated a terrorist organization.

In recent years, the authorities have cracked down hard on disagreements against not only Islamist political opponents but also secular pro-democracy activists, journalists and online critics. The tactic has left the president and his supporters without any formal political opposition.

Critics say the 596-seat legislature will be like the previous one, which was little more than a rubber stamp on al-Sisi’s policies, leaving the general-facing president with almost uncontrolled power.

The pro-government party Mustaqbal Watan, or “Future of the Nation”, has the largest number of individual candidates with 284 in the two phases.