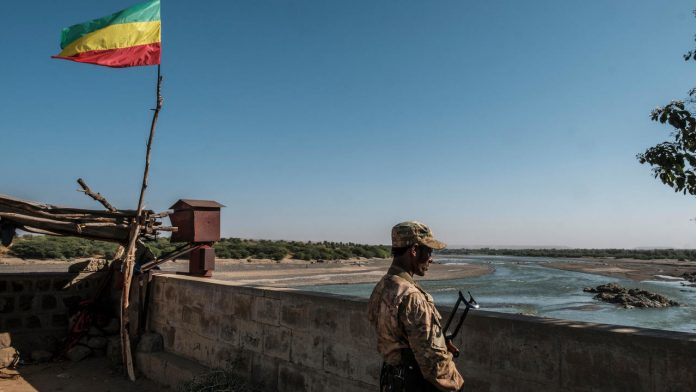 For more than three weeks, Ethiopia and Tigray have engaged in fierce fighting, which the International Crisis Group said on Friday had left thousands dead “including many civilians as well as security forces”.

On Friday night, at least one rocket from the northern Tigray region aimed at the neighborhood of Eritrea, four regional diplomats told AFP.

Abiy, the winner of last year’s Nobel Peace Prize, on Thursday announced a “third and final phase” in his campaign against the leaders of the Tigray People’s Liberation Front (TPLF).

Global concerns are still focused on half a million people in Mekele, Tigray’s regional capital, which the army says it has surrounded before the threatened attack.

World leaders and human rights groups have warned that such a strike could violate war rules and called for urgent mediation.

Pope Francis was among those worried about the intensifying fighting, the growing loss of life and displacement, Vatican media chief Matteo Bruni said on Friday.

Abiy announced military operations in Tigray on November 4 after months of friction between his government and the TPLF, which dominated Ethiopian politics for nearly three decades before Abiy took office in 2018.

The Prime Minister has refused to negotiate with the TPLF and dismissed talks on dialogue as “interference” in Ethiopia’s internal affairs.

On Friday, he met with three former African leaders – Joaquim Chissano from Mozambique, Ellen Johnson Sirleaf from Liberia and Kgalema Motlanthe in South Africa – broadcast this week by the African Union as a mediator.

“Applying the rule of law”

In a statement issued after their meeting in Addis Ababa, Abiy said he appreciated “this gesture and … the steadfast commitment that this shows to the principle of African solutions to African problems”.

Nevertheless, the government has a “constitutional mandate responsibility to apply the rule of law in the region and across the country,” his office said in a statement.

“Failure to do so would promote a culture of impunity with devastating costs to the country’s survival,” it said.

UN chief Antonio Guterres welcomed talks with the AU envoy and called on all parties to “peacefully resolve the conflict”.

The UN Secretary-General also emphasized the need to “ensure the protection of civil, human rights and access to humanitarian aid for the affected areas”.

However, the Tigrayan government said on Friday that the federal army bombed towns and villages and caused extensive damage, although it did not specifically mention Mekele.

“Our struggle will continue from all sides until the self – determination of the people of Tigray is guaranteed and the invading force is expelled,” the Tigray authorities said in a statement read on regional television.

A communication outage in Tigray has made it difficult to verify allegations from both sides of the fighting.

Hostilities have erupted in a year when the 55-member AU – headquartered in Addis Ababa – decided to play a more prominent role in resolving conflicts across the continent under the slogan “Silencing the Guns”.

At least one rocket fired from Tigray targeted the neighborhood of Eritrea on Friday night, four regional diplomats told AFP, the second such attack since Ethiopia’s internal conflict broke out earlier this month.

There was no immediate confirmation of how many rockets were fired, where they landed and any damage or damage.

The TPLF has accused Ethiopia of using Eritrean military support in the fighting, a charge that Ethiopia denies.

The group took responsibility for similar strikes against Eritrea two weeks ago, but there was no immediate comment from its leaders on Friday.

Abiy, who ordered the “last” offensive against TPLF forces in Mekele after the deadline for their capitulation expired earlier this week, said “great care” would be taken to protect civilians and spare the city from serious damage.

The prospect of a full-scale attack accelerated diplomatic efforts this week to resolve the conflict, with the UN Security Council holding its first meeting on Tigray and US and European officials calling for restraint.

French Foreign Minister Jean-Yves Le Drian, who met with his Ethiopian counterpart Demeke Mekonnen in Paris on Thursday, called for urgent action to protect civilians as the humanitarian fallout from the crisis worsened across the region.

The UNHCR said on Friday that nearly 100,000 Eritrean refugees in Tigray could run out of food as early as Monday if supplies could not reach them.

In eastern Sudan, where more than 40,000 refugees have escaped the fighting in Tigray, local authorities are struggling to cope with the sudden increase in demand for food, shelter and other life-saving items.