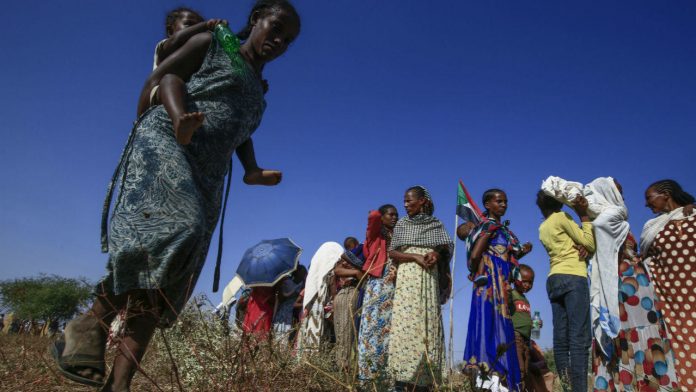 The Ethiopian military on Sunday threatened a “decisive” attack on the capital of the opposite Tigray region as it tried to repel the local government and warned the city’s half a million civilians to flee, warning that the attack would show “no mercy”.

The Ethiopian military on Sunday threatened a serious attack on Mekele, the capital of the opposite Tigray region and the seat of the local government it is trying to get rid of, warning civilians to flee while they still can.

“The next crucial battle is to surround Mekele with tanks,” Dejene Tsegaye, a military spokesman, told broadcasters on Sunday, threatening to lay siege to the city.

He added a warning to Mekele’s half a million inhabitants: “Save yourself. A directive has been communicated for you to distance yourself from this junta, after that there will be no mercy.”

Prime Minister Abiy Ahmed – last year’s winner of the Nobel Peace Prize – launched a military campaign against the Tigray People’s Liberation Front (TPLF) on November 4, accusing his forces of attacking two federal military camps in the region and the party of defying their government and trying to destabilize it.

A communications shutdown in the region has made claims from both sides of the conflict difficult to verify, but hundreds of people are reported to have been killed while tens of thousands have fled the fighting to neighboring Sudan.

Abiy’s government has claimed the capture of a number of cities in recent days, including the ancient city of Aksum and the city of Edega Hamus, 100 kilometers north of Mekele.

“The Armed Forces has controlled the city of Edaga Hamus, which is on its way from the Adigrat to Mekele,” Ethiopia’s emergency watchdog, an authority, said on Sunday. “The Armed Forces is currently marching towards the campaign’s final target, Mekele city.”

The TPLF claimed on Saturday that civilians had been killed during a “heavy bombardment” of the city of Adigrat by the Ethiopian Armed Forces (EDF). The government insists that it does not target civilians.

The TPLF led the overthrow of Mengistu Hailemariam, head of Ethiopia’s military Derg regime, in 1991 and dominated the country’s policies until Abiy became prime minister in 2018.

The party continues to control Tigray, one of ten regional states under Ethiopia’s system of ethnic federalism, where regions are bounded by ethnicity and language.

TPLF leaders have complained of being fired by Abiy and accused of the country’s misery. The bitter battle with the central government led to the TPLF holding its own elections this year in the face of a national launch due to the coronavirus pandemic.

Abiy has rejected all demands for peace, including from the African Union – which plans to send three former national presidents as special envoys in the coming days – the United States and the United Nations who have warned of a looming humanitarian catastrophe.

His government views the TPLF as a criminal administration and seems intent on winning the military battle rather than negotiating.

Military action has already spread beyond Tigray’s borders with TPLF firing rockets at Asmara, the capital of the northern Eritrean neighborhood, which it accuses of supporting the Ethiopian government and the southwestern city of Bahir Dar.

The campaign has seen warplanes bombing Tigray and fierce fighting, while Amnesty International has documented a brutal massacre in which “points and probably hundreds of people were stabbed or hacked to death” in the southwestern city of Mai-Kadra.

The UN has called for the opening of humanitarian corridors to provide access to aid agencies, and has said it is preparing for as many as 200,000 refugees to flee unrest in the coming months.