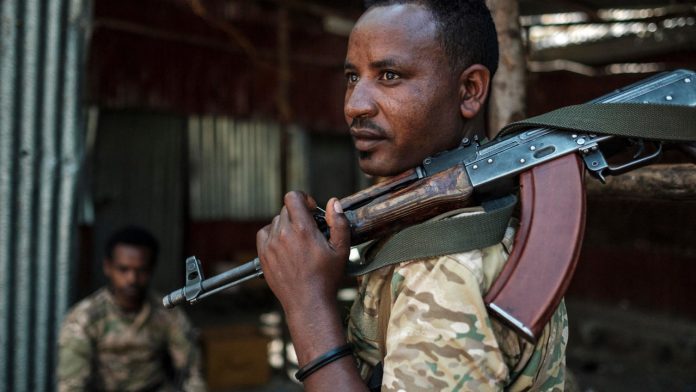 On Thursday, Ethiopian Prime Minister Abiy Ahmed ordered the country’s army to launch a “final” offensive against Tigray’s dissident leaders in their regional capital, Mekele, saying the deadline for their capitulation had expired.

The ultimatum was rejected by the region’s leaders, whose forces have been fighting federal troops in the north of the country for three weeks. Violence has claimed hundreds of lives and displaced more than 40,000.

In a statement posted on Twitter on Thursday, Abiy said: “The last peaceful gates that had been open for the TPLF clique to go through have now been properly closed due to the TPLF’s contempt for the people of Ethiopia,” adding: “Ethiopian National Defense Forces has now been instructed to complete the third and final phase of our rule of law. “

Abiy said “thousands” of TPLF militias and special forces had surrendered to federal forces before the deadline expired.

It was not immediately clear how close the army was to Mekele, the capital of the Tigray region. A communication outage in Tigray and reporting restrictions have made it difficult to verify claims from both sides.

Diplomats informed of the fighting told AFP on Wednesday that federal forces were at least 30 kilometers from Mekele in the north and south.

The threatened attack and fear for Mekele’s half a million residents accelerated diplomatic efforts to mediate this week, with the UN Security Council holding its first meeting on the crisis on Tuesday.

A team of special envoys sent by the African Union (AU) to try to mediate between the warring parties arrived in Addis Ababa late on Wednesday, a spokesman for the 55-member bloc said.

UN Secretary-General Antonio Guterres called on “Ethiopian leaders to do everything possible to protect civilians” when the United States, the EU and other international powers encouraged mediation through the AU, headquartered in Addis Ababa.

Rights groups have warned that bombing Mekele could be a war crime.

Abiy’s office on Thursday said for the first time that a “humanitarian access road” would be opened under the leadership of the country’s peace ministry without details. It is also said that distribution of supplies has begun in areas of Tigray that are now under government control.

It came hours after the UN said the shortage had become “very critical” in the Tigray region, as its population of 6 million is still closed.

“Despite the Ethiopian military’s warnings to residents, warnings alone do not relieve the government of its obligation to constantly take care of the protection of civilians, especially when using air force and heavy weapons,” in narrow urban areas, Human Rights Watch said on Thursday.

Fuel and cash are running low in Tigray, more than 1 million people are now estimated to be displaced and food for nearly 100,000 Eritrean refugees will be gone in a week, according to the UN update released overnight. And more than 600,000 people who rely on monthly food zones have not received them this month.

Travel blockages are so terrible that even within Mekele, the UN food program cannot access transport food from its warehouses there.

A statement this week from a representative of civil society in the region, seen by the AP, described the heavy bombardment of communities elsewhere that has prevented many residents from fleeing.

Other people move frantically in the Tigray region from one district to another and “live in church associations, streets, schools, health centers,” the statement warned, asking for a safe corridor to send in help when food runs out.

Human Rights Watch warns that “measures that intentionally impede aid delivery” violate international humanitarian law and that a total suspension of communications “could amount to a form of collective punishment by imposing sanctions on people without a clear legal basis”.