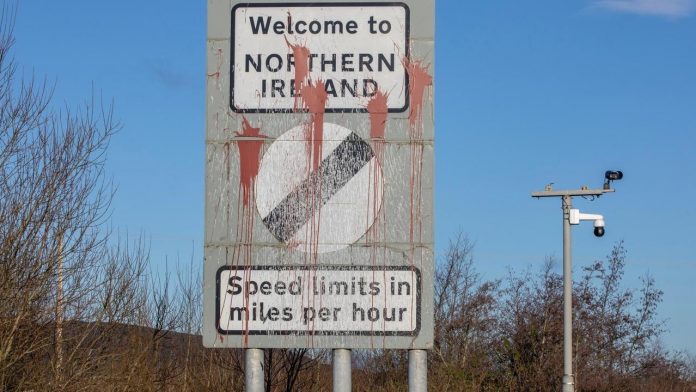 The European Union abruptly reversed a plan to use Brexit emergency measures to restrict exports of Covid-19 vaccines from crossing the Irish border into Britain after sending shockwaves through Northern Ireland, London and Dublin.

In a sharp escalation of the EU’s fight to secure vaccine supplies, Brussels had said it would trigger clauses in the Northern Ireland Protocol to prevent vaccines from moving across the open border between EU member Ireland and the British-run province.

Following screams in London, Belfast and Dublin, the EU issued a statement just before midnight, saying it would ensure that the Northern Ireland Protocol, which aims to keep the border open, is not affected.

However, it warned that if vaccines and active substances were to move to third countries and out of the bloc, they would use “all instruments at their disposal”.

Ireland said that a change of heart in the EU was welcome but that lessons should be learned.

“The protocol is not something that can be easily manipulated, it is an essential, difficult compromise that protects peace and trade for many,” Irish Foreign Minister Simon Coveney said on Twitter.

The EU Com statement tonight confirming the NI protocol Art 16, safeguard clause, will not be triggered. Welcome news, but lessons should be learned; the protocol is not something that can be easily manipulated, it is an essential, difficult compromise that protects peace and trade for many. pic.twitter.com/QLKpfhR9Yt

The EU’s original plan was intended to prevent the open border between EU member Ireland and Northern Ireland from acting as a backdoor for vaccine supplies to the UK.

The public upheaval followed a round of hectic talks as British Prime Minister Boris Johnson told European Commission President Ursula von der Leyen about his “serious concerns” while Irish Prime Minister Micheál Martin spoke to both Johnson and the EU chief to find a solution. .

In a tweet late Friday, von der Leyen said she had spoken to Johnson: “We agreed on the principle that there should be no restrictions on the export of vaccines from companies where they meet contractual responsibilities.”

We agreed on the principle that there should be no restrictions on the export of vaccines from companies where they fulfill contractual liability.

The fastest mass vaccination in history creates tensions around the world when the great powers buy up doses in bulk and poorer countries try to navigate a financial and diplomatic mining field to collect everything that is left.

The EU, whose member states are far behind Israel, the UK and the US in rolling out vaccines, is encrypting for supplies just as the West’s largest pharmaceutical manufacturers are slowing deliveries to the bloc due to production problems.

The British-Swedish pharmaceutical manufacturer AstraZeneca has been caught in the crosshairs after saying last week that it would not deliver promised vaccines to the EU in March due to production problems in Belgium.

It angered Brussels, which has demanded to know why the company cannot divert supplies from its UK websites, which have produced millions of shots for British citizens.

The UK has its own domestic supply chain in place for AstraZeneca, including rolling it out in Northern Ireland, but it imports Pfizer’s vaccine from a plant in Belgium.

The European Commission agreed on a broader plan to control the export of vaccines from the block, including to the UK, and argued that it was needed to secure its own supplies.

But the EU’s abortion attempt to use the Northern Ireland Protocol sparked outrage in the province.

Maintaining the fragile peace of Northern Ireland without allowing the United Kingdom a back door to EU markets through the British-Irish 310-mile border was one of the most difficult issues in the Brexit divorce talks.