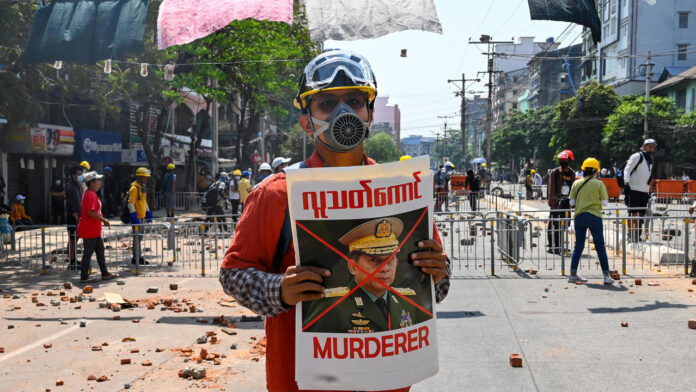 The EU placed Minanmar’s junta chief Min Aung Hlaing on a blacklist for freezing visas and visa bans on Monday over a coup and violence against protesters, the bloc’s official newspaper said.

“Commander-in-Chief Min Aung Hlaing has been directly involved in and responsible for decision-making on government functions and is therefore responsible for undermining democracy and the rule of law in Myanmar,” the list said.

It said the army chief was “directly responsible” for a brutal aggregation of authorities in the wake of the February 1 takeover.

The 27-nation bloc also added nine other leading military officers and the head of the Myanmar Electoral Commission to the list.

The lists – approved by the Foreign Ministers at a meeting in Brussels on Monday – represent the EU’s first sanctions over the coup.

Myanmar has been in turmoil since the military fired civilian leader Aung San Suu Kyi last month, sparking a mass uprising that security forces have tried to crush with a campaign of violence and fear.

>> Myanmar’s anti-coup uprising: A humanitarian catastrophe in the beginning

European diplomats have said that companies linked to the military are likely to be subject to sanctions in the coming weeks.