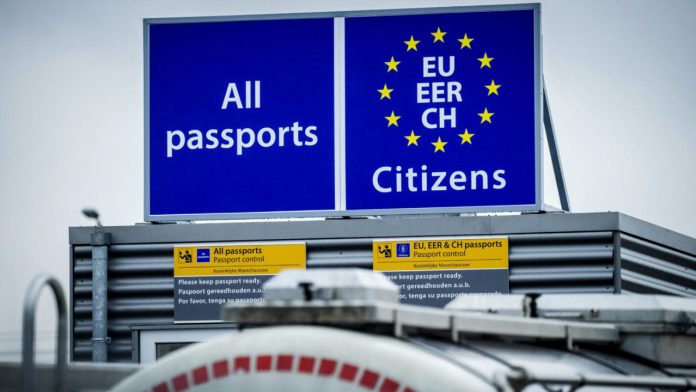 EU leaders will meet under pressure on Thursday to accelerate Europe’s expansion of coronavirus vaccines and share across border closures and what the introduction of vaccine certificates could mean.

The video summit for the leaders of the 27-nation bloc comes a year into the Covid-19 crisis, as most of the EU is experiencing a second wave of falls – or a third wave for some – that will stubbornly not diminish.

And member states are now facing outbreaks of more contagious varieties from the UK and South Africa.

Brussels has warned six governments, including Germany, of unilateral border restrictions, while tourist-dependent countries are putting pressure on them to remove travel barriers in time for the summer holidays.

After a slow start to EU vaccination – largely because the EU’s plan was dependent on the vaccine from pharmaceutical giant AstraZeneca, which under-delivered – European capitals hope that deliveries will increase from April when Pfizer / BioNTech and Moderna increase production.

A unit vaccine by Johnson & Johnson may also be approved in mid-March.

European Commission President Ursula von der Leyen told the German regional daily newspaper Augsburger Allgemeine that, despite the friction with AstraZeneca, “vaccine manufacturers are our partners in this pandemic”.

Her goal is to have 70 percent of adults in the European Union vaccinated by mid-September.

Greece is going it alone

Only four percent of the bloc’s 450 million people have had at least one jab, according to an AFP summary of official figures – and only two percent have been fully vaccinated with two jabs.

But the thoughts are already turning to vaccine certificates.

Several EU officials and diplomats warned on Wednesday that even if they support a verifiable vaccination registration, it is too early to look at using “vaccine passports” to enable easier travel.

“We still have no advice from the health authorities (on) what the vaccine does and does not do: Can you still contaminate others if you have been vaccinated? I do not know,” a senior EU diplomat told reporters.

“What happens to those who have not been vaccinated? What procedure do they have to go through in order to enter a country? I think this is still being discussed,” he said.

France and Germany in particular are opposed and fear a travel sketch between a minority of vaccinated oats and a majority of unvaccinated have-not.

However, preparatory EU talks have already begun with the International Air Travel Association, which is launching its IATA Travel Pass, an app that stores vaccine data.

At the same time, Greece has announced that it is ready to go faster than its EU counterparts, and has already signed a bilateral travel agreement with Israel, the world’s vaccination master.

It is reportedly in similar talks with the former EU country UK, where bookings of low-cost flights to Greece, Spain and Turkey increased on Tuesday after London said curbs for foreign leisure travel could be removed as early as mid-May.

The EU’s leading diplomat acknowledged that all EU countries were “anxious” to find a safe way to resume travel in time during the June-September tourist season, but said “we must move forward together”.

An EU official, who also spoke on condition of anonymity, was more blunt, saying the EU wants to avoid “a new death season”.

Brussels is also concerned that worrying variants may require revised booster shots, which in turn would mean that vaccine certificates would have to be constantly updated.

A more pressing problem than the certificates, however, is the strict border restrictions introduced by several EU countries to limit virus variants, which the Commission considers to be disproportionate.

It has written warning letters to Belgium, Denmark, Finland, Germany, Hungary and Sweden about their actions, giving them until the end of next week to respond.

Another EU diplomat said: “In this case, we needed to emphasize the rules we have collectively signed.”

The EU official said that such restrictions “without the intervention of the Commission” could be worse than what we see today.

He added that he expected “a rather lively discussion between Member States” on the issue.