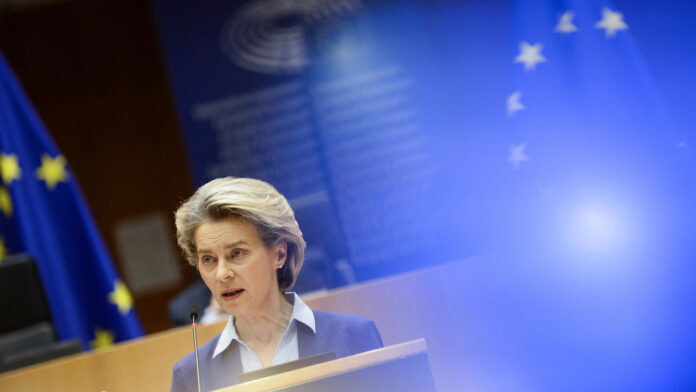 The European Commission will on Wednesday extend EU powers to potentially block the export of COVID-19 vaccine to the UK and other areas with much higher vaccination levels, and to cover cases of companies reloading contracted supplies, EU officials said.

The regulation aims to make vaccine trade reciprocal and proportionate so that other vaccine-producing countries sell to Europe and the EU does not export much more than it imports, said an EU official.

Without numerical targets, it is unlikely that the change will trigger a mass export ban on EU-made vaccines, the official said in light of the announcement on Wednesday.

“I really do not see it, because we have our international obligations and we want to keep the supply chains running and the global system moving and flowing,” the official said.

The regulation will form the basis for the 27 EU governments to decide whether or not to block vaccine exports.

“In practice, all of this is a paper that says please take these things into account when looking at approving export permits,” the official said.

The move, which EU officials said could affect AstraZeneca and Johnson & Johnson, is designed to avoid even limited supply shortages to a region whose inoculation program has been hit by delays and delivery issues.

Shipments abroad can also be detained if vaccine-producing countries, such as the UK and the US, do not allow exports to the EU, officials said, confirming comments from Commissioner Ursula von der Leyen last week.

As tensions in London and Brussels rose on Monday due to a possible export ban, the UK demanded that EU authorities allow the delivery of vaccines they have ordered.

On Tuesday, Prime Minister Boris Johnson said Britain did not believe in imposing vaccine blockades. “I am encouraged by some of the things I have heard from the continent in the same sense,” he told a news agency.

Johnson & Johnson has announced delays in second-quarter deliveries to the EU, which a second EU official said could lead to consequences under the Commission’s amendment covering companies backloading agreed quarterly deliveries.

All vaccine manufacturers can be affected, the other official added, with direct knowledge of the Commission’s decision. Some on the EU’s list of countries exempted from monitoring vaccine exports, such as Israel, are likely to be removed due to their very high vaccination levels, the first official said.

“It does not mean that they do not receive vaccines. It just means they are not automatically released anymore, said the first EU official.

‘We do not want the same delays in Q2’

This month, the EU used an export control mechanism, set up at the end of January, to block AstraZeneca vaccine shipments to Australia.

This mechanism can only be activated if companies do not meet agreed quarterly delivery targets. The block followed AstraZeneca’s announcement of sharp cuts in deliveries to the EU during the first quarter.

With the changes to be adopted on Wednesday, the EU will be able to block exports to cover companies that respect their quarterly agreements but backload deliveries until the end of the period, said the official, who asked to remain anonymous.

Johnson & Johnson, which has committed to delivering 55 million doses to the EU between April and June, plans to start deliveries in the second half of April.

The company told EU officials that production issues could make it difficult to reach its second-quarter target, but it is striving to do so.

Moderna and Pfizer / BioNTech also had delays in deliveries of vaccines to the EU, although they are set to meet their overall targets for the first quarter. “We do not want the same delays to occur during the second quarter,” the other official said.