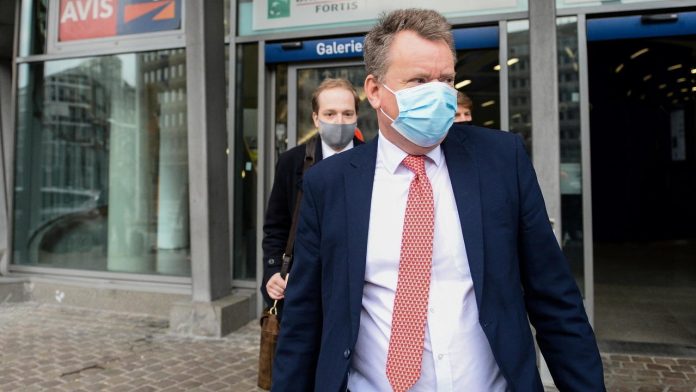 Trade negotiations between the EU and the UK after Brexit reached the crisis point on Monday with the result very uncertain and the risk of a harmful “no-deal” still alive.

EU chief negotiator Michel Barnier and his counterpart to the UK, David Frost, worked late on Sunday in Brussels, seeking to close a deal after eight months of ugly talks.

Irish Prime Minister Micheal Martin warned that the chances of an agreement were only “50-50”, while sources close to the talks said discussions were slow and expectations low.

The UK left the EU on 31 January but will leave the EU internal market at the end of the year after a transitional period that was originally intended to allow time for new ties.

The aim of the negotiations is to create a trade relationship with zero tariffs and zero quotas in the hope of avoiding major disruptions coming on 1 January.

Barnier and Frost are expected to continue talking through Monday and report back to their respective leaders, EU President Ursula von der Leyen and British Prime Minister Boris Johnson.

The two leaders will speak by telephone later in the day.

All eyes are on an EU summit on Thursday, with the prospect that some deal – or the failure to find one – will be added to the bloc’s 27 leaders at that time.

A source close to the talks said the situation was “very difficult” and that the negotiations were in their “last useful days”.

“We are on a very narrow path and it is impossible to predict the outcome,” the source explained.

Several sources said that the most difficult question was how to guarantee fair trade in future ties and set up a quick sanction mechanism if any of the sides were to go back, for example environmental or health standards.

The United Kingdom is very reluctant to accept a broad and binding arrangement and sees it as an infringement of its newly discovered sovereignty after 47 years of EU membership.

“Basically, if the talks fail now, the two sides failed to agree on what is foul play and what to do about it,” said an EU diplomat.

Johnson has insisted that Britain will “thrive” regardless of the outcome of the talks, but he will face serious political turmoil if he can not cover an agreement.

“Johnson has a huge decision to make in the next 48 hours,” said Mujtaba Rahman of Eurasia Group, a consulting firm.

“A majority of the government would prefer an agreement to limit border disturbance on January 1, but will support the prime minister’s ruling if he chooses to do nothing,” he said.

Without an agreement, tariffs would be levied on the huge volumes of trade between the UK and the European continent, through the Channel Tunnel and by ship from 1 January.

Travelers between both sides would also suffer further passport delays and bureaucracy for foreign residents and businesses.

Ireland’s Martin insisted that “a no-deal would be very detrimental to all concerned, to the United Kingdom, to the Irish economy and indeed to the economies of the Member States.”

“It is very, very important that common sense prevails here and that an agreement is made,” he added, pointing to Thursday’s summit as a critical moment.

France, meanwhile, is seen as the most reluctant to compromise between Europeans and takes the toughest line against Britain, especially when it comes to fishing rights and maintains rules of fair trade.

For the second time in three days, European Minister Clement Beaune warned on Sunday that France could veto a deal if French interests are not protected.

The warning was seen as intended for both the UK and EU partners that Paris fears is too soft against London, especially Germany.