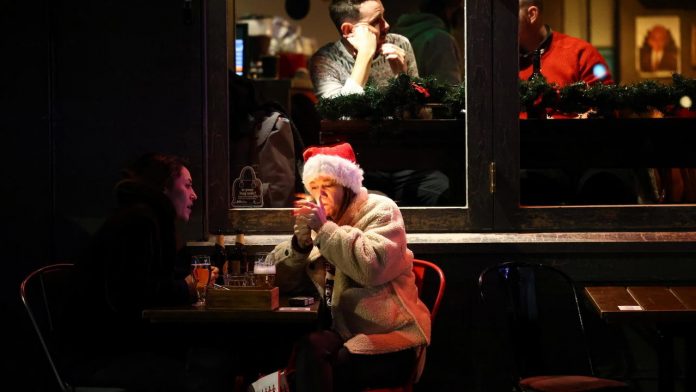 Hopes of ending the pandemic were raised by positive reviews of the Modern Covid-19 vaccine, but a study warned that at least one-fifth of the world’s population in poorer countries may not have access to vaccines until 2022.

With the virus re-emerging in Europe, Germany closed non-essential shops and schools, parts of England came under tougher curbs and the Netherlands expanded its borders.

“It is very good that we are closing the shops, it is for our health. We can not wait for things to fall apart,” says Jürgen, a shopper in Berlin, where people rushed to finish their Christmas shopping before closing.

Germany had done relatively well with the first wave in the spring, but it has struggled to hold a resurgence in recent months and its health minister said it wanted the European Union to approve the Pfizer BioNTech vaccine “before Christmas”.

The EU’s 27 member states are striving to launch Covid-19 vaccinations “on the same day” in a sign of unity, European Commission President Ursula von der Leyen said on Wednesday.

Her statement to the European Parliament came as a pressure on the bloc to catch up with the United States and the United Kingdom, which have already begun inoculating people with the Pfizer-BioNTech vaccine manufactured in Europe.

Pubs, bars, restaurants and other hospitality venues will be closed, in addition to takeaways, as well as theaters and other entertainment venues.

The Netherlands, France and Turkey have also announced restrictions on being in force during the holidays.

The United States is still the hardest hit nation, setting records for new daily infections on Tuesday with more than 248,000 cases.

Washington National Cathedral rang its bells 300 times on Tuesday in memory of the 300,000 people who have lost their lives due to coronavirus in the United States.

The situation has become serious in California, where officials ordered thousands of extra body bags because Los Angeles had fewer than 100 available intensive care beds for a county of 10 million people.

The United States has begun using the Pfizer-BioNTech vaccine, and the Food and Drug Administration on Tuesday issued an optimistic briefing on the Moderna candidate also ahead of a meeting with experts on whether to grant it emergency approval.

The regulator also approved the country’s first rapid home coronavirus test for Covid-19, which is available without a prescription and gives a result of about 20 minutes.

Elected President Joe Biden said on Tuesday that he would be vaccinated in public.

With rich nations reserving more than half of next year’s potential doses, there are fears that the poorer parts of the world will remain.

Although pharmaceutical manufacturers all produce effective, safe vaccines and meet their maximum global manufacturing targets, a study published Wednesday by Johns Hopkins University researchers warned that “at least one-fifth of the world’s population will not have access” by 2022.

The World Health Organization has said it is in talks with Pfizer and Moderna to include their vaccine at affordable prices for poor countries.

The widespread deployment of vaccines is seen as crucial to reviving the global economy.

“I have been at home for the last eight months, there has been no income,” said Ashwin Pal, a diving operator in Fiji, where the lack of visitors has devastated the main tourism sector. “Life has been pretty tough.”