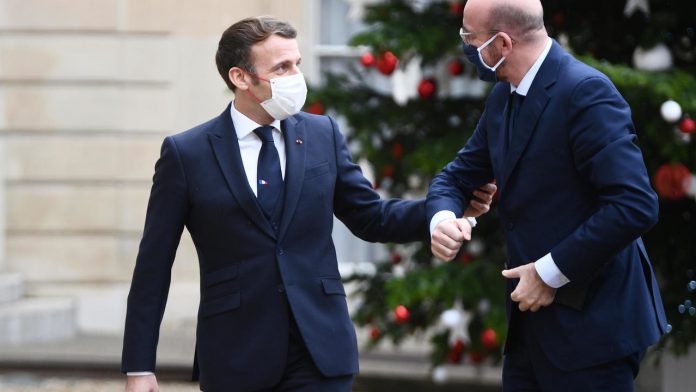 A number of European leaders and top French officials rushed into isolation on Thursday after President Emmanuel Macron tested positive for Covid-19 and repeated political agendas across the continent.

A flow of contact tracing followed France’s confirmation that Macron had become the latest world leader to come into contact with Covid-19, following British Prime Minister Boris Johnson and US President Donald Trump.

Macron, 42, was tested after “the onset of the first symptoms” and will now self-isolate for seven days in accordance with national rules, his office said in a statement.

“He will continue to work and perform his activities at a distance,” the statement said.

The timing is difficult for Macron, who is trying to deal with the pandemic crisis in his own country while keeping an eye on Brexit talks and a number of other international issues.

Officials stressed that he was still working and attending a conference on economic development on Thursday afternoon.

Macron attended an EU summit in Brussels last week and attended a conference in Paris on Monday organized by the Organization for Economic Co-operation and Development (OECD).

European Council President Charles Michel and Spanish Prime Minister Pedro Sanchez were both at the Paris conference and are isolated.

The Portuguese Prime Minister Antonio Costa has also gone into self-isolation and interrupted all immediate events on his agenda after having lunch with Macron on Wednesday.

Macron has suspended a planned trip to Lebanon, where he pushed for far-reaching political change after a giant explosion in the port of Beirut in August.

“Defeat the pandemic together”

But a spokeswoman for the German government said Chancellor Angela Merkel took a test a few days after the EU summit and that it was negative.

French Prime Minister Jean Castex will isolate himself after contacting Macron, his office said, adding that he showed no symptoms and had tested negative.

He needs another confirmed negative result before he can come out of isolation next week, his office said.

Macron’s wife Brigitte will also be self-isolating but shows no symptoms.

Employees around the world rushed to wish Macron a speedy recovery.

“Sorry to hear my friend @EmmanuelMacron has tested positive for coronavirus. We wish you all a speedy recovery,” tweeted Johnson, who has locked horns with Macron in recent months during Brexit talks.

EU Commission President Ursula von der Leyen said she was with Macron “with all my heart”.

“We will defeat this pandemic together,” she said on Twitter. “We will continue to work hand in hand to vaccinate and protect our citizens.”

Russian President Vladimir Putin said he had learned of Maron’s positive test “with concern” and wished his French counterpart “a speedy recovery and good health for many years to come”.

Macron had repeatedly called for caution against the spread of the virus and in public he always wears a face mask that covers the mouth and nose.

France eased restrictions introduced earlier this week to fight the second wave of coronavirus, but the level of infection is still high.

There is still a nationwide curfew from kl. 20:00 to stop the spread of the virus while restaurants and cafes as well as theaters and cinemas remain closed.

More than 59,300 people have died in France since the pandemic began.

More than 17,000 new cases were registered on Wednesday alone, which created concern when people shop and travel ahead of the Christmas weekend.

Like other EU countries, France is putting its hopes on a vaccine and Castex said on Wednesday that the country will receive 1.16 million doses by the end of the year.

Castex said the start of the vaccine campaign was conditional on approval by the European Medicines Agency, expected on December 21.

Von der Leyen said on Thursday that the EU would begin inoculating on December 27.

Another problem for the French authorities is that according to an opinion poll, only 53 percent of the population wants to be vaccinated, among the lowest prices in the world.