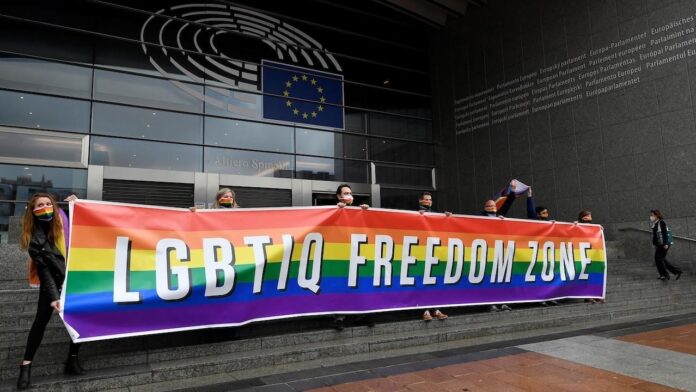 The European Parliament has overwhelmingly adopted a resolution declaring the 27-member European Union a “zone of freedom” for LGBT people, an attempt to drive back the growing homophobia in Poland and elsewhere.

The Riksdag announced on Thursday that there were 492 votes in favor of the resolution and 141 against in a vote that came after a debate in a parliamentary session in Brussels on Wednesday.

The dissolution came largely in response to developments over the past two years in Poland, where many local communities have adopted largely symbolic resolutions declaring themselves free from what conservative authorities have called “LGBT ideology”.

These cities say they are trying to protect traditional families based on unions between men and women, but LGBT rights activists say the designations are discriminatory and make gays and lesbians feel unwelcome. The areas have become known as “LGBT-free zones.”

Polish President Andrzej Duda won re-election last summer after a campaign in which he often spoke out against the LGBT rights movement and portrayed it as a threat to families. In one case, he described it as a “ideology” more dangerous than communism.

The resolution is the work of a cross-party group in the European Parliament, the LGBTI Intergroup. The text refers to “growing hate speech from public authorities, elected officials – including by the current president” in Poland.

But it is also mentioned that discrimination is still a problem throughout the EU.

The Polish government has condemned the resolution. It argues that Poland, as a sovereign nation and a more conservative society than many Western European countries, has the right to defend its traditional family values ​​based on a long association with Roman Catholicism. It accuses EU lawmakers of exceeding its jurisdiction.

The government has also claimed that the proportion of hate crimes is lower in Poland than in many countries in Western Europe.

But LGBT rights activists say this is impossible to measure. Cuba Gawron, who has documented local anti-LGBT resolutions with the Atlas of Hate group, said there was no mention in the Polish penal code specifically of homophobic crimes, so police do not keep statistics on such crimes.

“We do not know the full number of such cases,” he said.

The European Parliament’s resolution stated that the fundamental rights of LGBT people have also been “seriously hampered” recently in Hungary due to a de facto ban on the legal gender recognition of transgender and intersex people. It also notes that only two Member States – Malta and Germany – have banned “conversion therapy”, a controversial and potentially harmful attempt to change a person’s sexual orientation.