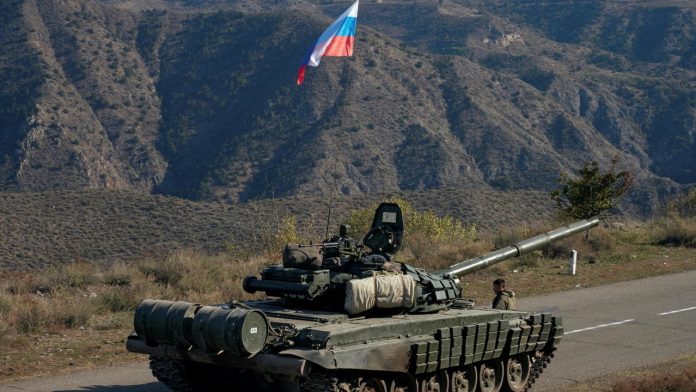 Russia brokered a ceasefire agreement on Monday that ensured territorial progress for Azerbaijan in the Nagorno-Karabakh ethnic Armenian mining region. But some analysts say Azerbaijan, Turkey and Russia are all benefiting from the deal while protests have erupted in Armenia, accusing Prime Minister Nikol Pashinyan of betraying national interest.

The Russian-brokered ceasefire on November 9 ended a six-week conflict between Armenian and Azerbaijani forces – and intends to use Russian troops as peacekeepers in Nagorno-Karabakh.

The agreement, which means that Armenia accepts Azerbaijani gains in the region, has sparked demonstrations in Armenia demanding the resignation of Prime Minister Pashinyan and accusing him of “betrayal”. Russia is a long-standing Armenian ally, which makes many Armenians see the Moscow ceasefire agreement as another betrayal.

Russian President Vladimir Putin himself announced at midnight from Monday to Tuesday, stressing that the deal anchors “a total ceasefire” and “cessation of military hostilities” in Nagorno-Karabakh.

Russia deployed about 2,000 troops as soon as the ceasefire took effect. According to the treaty signed by Yerevan, Baku and Moscow, they will be deployed when Armenian forces leave areas under Azerbaijan’s control – that is, seven districts around Nagorno-Karabakh and a small part of the region itself. The now reduced self-proclaimed republic will remain under the protection of Russian soldiers. These troops will play a significant role in protecting the Lachin Corridor, the only supply route connecting Nagorno-Karabakh to Armenia.

A win for Azerbaijan – with Putin’s blessing?

Azerbaijan looks like the big winner in this conflict with its neighbor and bitter rival. It is important that the territories it has been given include the historic and strategic city of Shushi, located on the road that connects Armenia to the separatist capital Stepanakert. Azerbaijan President Ilham Aliev was really keen to present this as a triumph for his country – praising Armenia’s “capitulation” and calling Pashinyan a “coward” for not signing the deal in front of the cameras, adding that he said “we would chase them away from our country” like dogs, and we did ”.

Galia Ackerman, a Paris-based historian specializing in Eastern Europe and author of the Immortal Regiment: La Guerre sacrée de Poutine (“Immortal Regiment: Putin’s Sacred War”), claimed that Azerbaijan had Putin’s “silent” support: “Whether it is under Armenian or Azerbaijani control, Nagorno-Karabakh is not a priority for Putin, she told FRANCE 24. “The way he sees it, letting the war run its course was a way of trying to get rid of Pashinyan and change the political situation. in Armenia. ”

“Pashinyan was elected after a popular uprising in 2018 and began to look a little too independent, as far as Moscow is concerned,” Ackerman added. “In particular, he got rid of a few people from his pro-Russian security services. Why has Azerbaijan attacked now? I think it was a Putin project. ”

For his part, Pashinyan acknowledged that the conditions for a ceasefire are a blow to Armenian national pride and described the affair on his Facebook page as “incredibly painful for me and my people”.

‘Everyone benefits except Armenia’

Despite the arrival of French and American diplomats in Moscow on November 12, Paris and Washington played no part in the ceasefire agreement. France and the United States, together with Russia, co-chair the Minsk Group for the Organization for Security and Co-operation in Europe, which has the task of ensuring peace in Nagorno-Karabakh.

“What is very important for the Kremlin is the weakened role of the West, which was mainly due to the lack of focus,” US President Donald Trump Alexander Gabuev, a senior colleague at the Carnegie Moscow Center, told AFP.

Turkish President Recep Tayyip Erdogan is another big winner of this resolution of the Nagorno-Karabakh crisis. A close ally of Azerbaijan, Ankara will monitor the implementation of the ceasefire with the help of a joint observation center.

“There is a new regional order under establishment, with Russia still indispensable, growth of Turkish role and declining relevance to the West,” Gabuev wrote on Twitter.

“Russia was greatly struck by Turkey’s involvement in Caucasian geopolitics,” said Gaidz Minassian, a specialist in Armenia at the Sciences-Po University in Paris, FRANCE 24.

“Ankara was involved at all levels – especially at the military level – and now we can see how much more weight Azerbaijan attaches to ties with Turkey compared to those with Russia.”

In fact, all parties involved came forward – expect one. “Turkey is particularly strengthened by this, but of all the actors involved in this conflict, everyone except Armenia benefits,” Ackerman concluded.

Russia regains control of Armenia and gets boots on the ground in Nagorno-Karabakh; Turkey is strengthening its relations with Azerbaijan. and Azerbaijan are very happy that they have recovered territory that separatists had occupied for more than a quarter of a century. ”