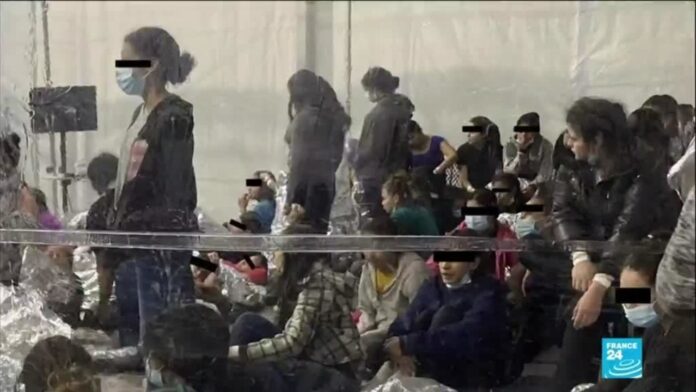 The first pictures of children at an American migration detention center appeared on Monday and showed them sleeping on carpets under foil blankets and separated in groups with plastic partitions.

Axios was the first media outlet to publish a series of photos taken at the Border Patrol Detention Center, a large tent site in the southern Texas city of Donna. The photos were released by Representative Henry Cuellar, a Texas Democrat from the border town of Laredo.

Cuellar said he released the photos because he wanted to draw attention to the extreme challenges facing border agents when looking at so many children, sometimes for a week or longer despite the border patrol’s three-day limit to detain minors.

In response to the photos, Vice President Kamala Harris described the current situation as “challenging” and said the Biden administration must “face the moment, and a lot of work is being put into it”.

Biden has promised to dismantle his predecessor Donald Trump’s restrictive migration policy, which included the automatic deportation of unaccompanied minors. He has also moved to speed up the reunification of hundreds of separated families.

The White House said on Monday that it was working to complete the details on how to allow media access to border facilities, adding that factors being considered include the protection of minors and coronavirus measures.

In February alone, the number of child migrants to the United States increased by more than 60 percent compared with the previous month. A total of 15,000 migrants under age are detained in the United States, a third of whom are held in adult housing.