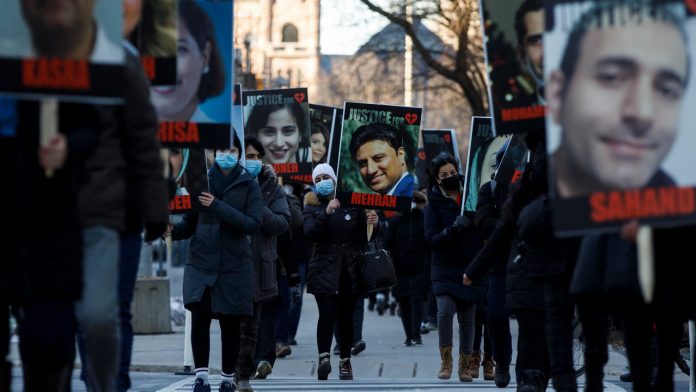 Canada and other nations whose citizens died in Iran’s killing of a Ukrainian jet a year ago on Friday called on Tehran to come clean over the tragedy and “deliver justice” to the families of the victims.

“We urge Iran to provide a full and thorough explanation of the events and decisions that led to this terrible plane crash,” the Coordinating and Response Group of Canada, the United Kingdom, Ukraine, Sweden and Afghanistan said in a statement.

They also said they “will hold Iran accountable for delivering justice and ensuring that Iran pays full compensation to the victims and the families of the affected countries.”

In Toronto, Canada’s Ontario province, nearly 200 people gathered in cloudy skies on Friday afternoon in front of the University of Toronto before holding a march in honor of the crash victims, according to an AFP photographer at the scene.

Many had signs showing the victims’ photos and names. Other people wore black face masks printed with the word “Justice”.

Among the marches was Hamid Niazi, who lost his wife, daughter and son in the crash.

“I’m not sure how I can explain it, I’m still in (a) denial and mistrust. I can not believe it happened to my family,” he told AFP.

“Sometimes I think I have a nightmare, that this could not happen.”

In Kiev, where the condemned plane was tied, wreaths of flowers were laid at the site of a future memorial dedicated to the victims. A giant screen displayed photos of passengers and crew members.

At the end of December, Iran offered to pay $ 150,000 to each of the families of the victims of Ukraine’s International Airlines Flight 752, acknowledging that its forces had incorrectly shot down on January 8, 2020, killing all 176 people on board, including 85 Canadian citizens and permanent residents.

On Thursday, Canadian Foreign Minister Francois-Philippe Champagne rejected the offer, saying: “The question of compensation will not be asked through unilateral statements by Iran but rather subject to state-to-state negotiations.”

In a separate statement on Friday, Canadian Prime Minister Justin Trudeau once again demanded from Iran a “thorough, transparent and credible inquiry into the cause of this tragedy.”

He also promised “to hold Iran accountable, inter alia, by ensuring that Iran provides full compensation to the victims of the PS752 and their grieving families, and in ensuring that those responsible are brought to justice.”

In mid-December, Canada’s special adviser on the tragedy, former Minister Ralph Goodale, issued a 70-page report in which he argued that Iran should not “investigate itself” in the matter, stressing that many of the key details of the crash remained unknown.

Trudeau, Champagne and several other members of the government spoke to the families of the victims on Thursday during a private virtual memorial day.

The Prime Minister also recently announced that January 8 would be known as Canada’s National Day of Victims of Air Disasters.