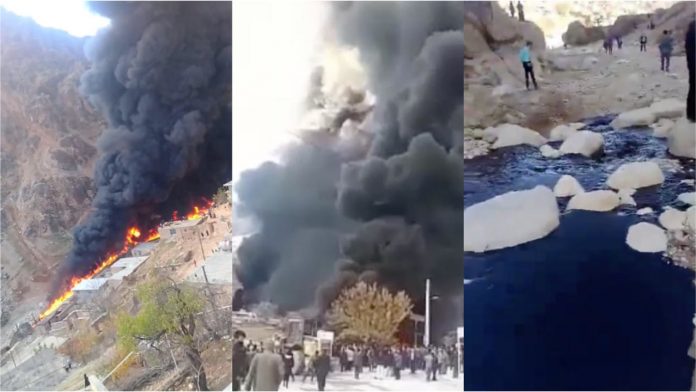 On December 13, an oil leak ignited from a pipeline in southwestern Iran and sent columns of toxic black smoke hundreds of meters into the air. The pipeline is located on the outskirts of Sarkhun, a small village in Chaharmahal and Bakhtiari province. Our observers in the village have lived with the risk for several years and know that they are next to a 40-year-old pipeline that can be ignited at any time.

Videos posted on social media show the village of Sarkhun surrounded by mountains, with a huge plume of smoke in the air. People can be seen running in all directions, shouting, gathering their loved ones, their belongings and their livestock.

The leak began after a landslide in the region that damaged the pipeline. The pipeline transports crude oil from southern Iran to Isfahan in central Iran and passes just a few dozen meters from the village of Sarkhun.

The fire spread beyond the pipeline and it took firefighters two days to completely extinguish it. However, the clean-up of oil spills continues and it can take weeks or even months to complete, according to experts consulted by FRANCE 24.

In this video filmed in Sarkhun, southwestern Iran, on December 13, 2020, thick smoke is seen spreading from a fire at an oil pipeline.

Shahin [not his real name] lives in Sarkhun:

“I was at work that day. I heard that the pipeline had been damaged and oil was flowing into the river. After a few hours it was lit. There was smoke everywhere. I could not see anything. I could not breathe. Fortunately, no one was right. next to the pipeline, but some people were injured, mostly by inhaling heavy smoke.Most left the village minutes after the incident, with the exception of poor people without access to transport or farmers who had herds to take care of.

This tweet reads: “The fire is not completely extinguished yet on December 14.”

The fire spread up the mountainside. It took three hours for firefighters to put out the fire around the pipeline, but two days for them to put out the fires that had spread higher up the mountain. But the biggest problem for us was not and is not the fire, it is the smoke and the smell of oil. There is a sticky black ash layer on everything you can think of: it is on our furniture, our house walls, on our cars.

It is on the crops in the fields and even on the cows. And we can not drink the water in our homes because the source it comes from has been polluted. Our crops have been destroyed by the spill. I do not know how long it takes the fields to recover.

The massive fire and the heavy smoke caught some of the villagers off guard.

Photos and videos of the fire have attracted a lot of attention to our village and this pipeline. But the pipeline has been causing us problems for several years. This is the fifth explosion we have had in the last 20 years.

The pipeline has been leaking for about five years – not a huge amount of oil, but enough because it has destroyed some businesses further down the river. There were some fish farms there, but oil pollution forced them to close.

We want the authorities to move the pipeline, move it far from the river and the village. Thousands of people downstream use the river water to drink and irrigate. It is dangerous and not healthy.

This video, which was tweeted on December 14, 2020, shows people near the village of Sarkhun looking at obvious oil pollution in the Sarkhun River after a leak and fire against an oil pipeline.

“The damage has been done”

The Sarkhun River flows into the Karun River, a source of drinking water and irrigation for millions of people in southwestern Iran.

Roham [not his real name] is an environmental and water resource expert who is familiar with the conditions in southern Iran. He explains the effects that this type of oil leak can have on people and the environment:

When crude oil is mixed with water sources, it first sinks because it is heavy. But eventually it comes to the surface and spreads. This is how it spreads over large areas in running water.

People watching firefighters put out the pipeline on fire.

According to some researchers, there are about 300 carcinogens in crude oil. So when mixed with drinking water sources, it can lead to a human catastrophe downstream.

Even if they manage to find alternative drinking water sources for the people downstream, these toxins will enter plants and vegetables eaten by humans and pets.

Iran’s oil ministry is equipped with efficient oil absorbers, but it is impossible to clean up any leaking oil. The ministry will be able to purify the water in the Karun-4 dam by measuring the water quality and stopping the pollution. But it is 40 km downstream from Sarkhun. Thousands of people live in the 40-kilometer zone.

The oil from the spill has already spread over a large area and the damage has occurred. I hope this time does its job properly. I think the worst is yet to come.

Yes, it was a landslide that caused the damage, but this excuse is not acceptable. Everyone in the region knows that this pipeline is about 40 years old and needs to be replaced, but the Ministry of Petroleum just does not care.

The Chaharmahal and Bakhtiari provincial governments on December 16 announced measures they had taken to clean up pollution and keep citizens safe. Officials said nine special vehicles had been sent to the area with environmental treatment equipment. Khosrwi Kiani, head of the province’s crisis management department, said more than 30 workers worked to clean up the environment of pollution and distributed “aid packages containing milk, masks and other hygiene supplies”.