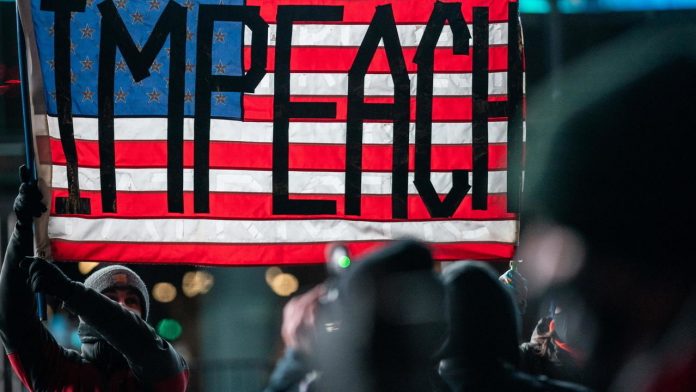 US President Donald Trump on Friday faced increasing demands that he be fired, including some former supporters, two days after his false allegations of electoral fraud encouraged a crowd that stormed the US capital.

Democratic leaders in Congress have called on Vice President Mike Pence and the Trump administration to remove the president for “his call for insurrection,” and promise to charge him a second time if he is not rejected.

When the talks about his shooting broke out, Trump released a video in which he condemned the violence that killed five people.

The Republican president almost came to admit his loss in the presidential election on November 3 and promised to ensure a smooth transition to a “new administration”. Elected President Joe Biden, a Democrat, will be sworn in on January 20.

Trump’s words stood in stark contrast to his speech on Wednesday, when he called on a crowd to go down to the Capitol when Congress met to certify Biden’s election victory.

Rioters stormed the building, overwhelming police and forcing authorities to transport lawmakers to secure places for their own safety.

A Capitol police officer died from injuries sustained in the attack, the force said late Thursday. A woman demonstrator was fatally shot by the authorities and three people died of medical emergencies.

The FBI offered a reward of up to $ 50,000 for information about people responsible for placing pipe bombs at the headquarters of the two major US political parties. The agency released a picture of a suspect wearing gloves and a hoodie wearing an item.

No time for accusations?

With less than two weeks left in Trump’s term, it was not clear if there was enough time left to complete the indictment.

Pelosi has not announced a decision, although she made it clear at a press conference that Democrats in their election rally wanted to act after Wednesday’s siege.

If he is indicted in the House, Trump would theoretically face trial in the Republican-controlled Senate, which is scheduled to be on hiatus until January 19. Aides to Majority Leader Mitch McConnell have not said what he would do if the House approved the charges.

The Democratic-led House accused Trump in December 2019 of pressuring the President of Ukraine to investigate Biden, but the Republican Senate acquitted him in February 2020. Only two other presidents in history have been charged, and no one has ever been charged twice.

Democrats will control the Senate after holding two by-elections in Georgia on Tuesday, but the new senators, Jon Ossoff and Raphael Warnock, will not be sworn in until the state certifies the results. The state deadline for doing so is January 22, although it may come earlier.

In Thursday’s video, a flat-toned Trump struck a conciliatory note that is rarely seen from him during his presidency and calls for “healing.” As recently as Thursday morning, however, Trump still claimed that the election had been stolen and he ended up acknowledging his loss.

Since November, Trump has unjustifiably condemned the election results as “rigged” due to widespread fraud.

The Trump campaign and its allies filed dozens of lawsuits challenging the vote, but almost all were rejected in state and federal courts. Election officials have said there is no evidence to support Trump’s claims.

‘Finished as a serious political person’

Pelosi and Schumer called on Pence and the Trump administration to invoke the 25th Amendment to the US Constitution, which would allow them to deprive the president of his powers if he is unable to perform his duties. According to an adviser, Pence opposes the idea.

At least two Republicans, Maryland Gov. Larry Hogan and US Representative Adam Kinzinger, said Trump must leave. Even the Wall Street Journal, seen as a leading voice for the Republican establishment, on Thursday night called on Trump to resign.

In an unsigned article, the paper’s editorial page described Trump’s behavior as “incurable” and said “this week has probably ended him as a serious political figure.”

“If Trump wants to avoid a second accusation, his best course of action would be to take personal responsibility and resign,” the paper wrote, concluding, “It is best for everyone, including himself, if he walks away quietly.”

Several senior Trump administration officials have resigned in protest of the Capitol invasion, including two cabinet members: Elaine Chao, the Secretary of Transportation and McConnell’s wife, and Betsy DeVos, the Secretary of Education.

At a press conference to present his choice of attorney general, Biden accused Trump of initiating the attack but did not comment on his possible removal.

The president has isolated himself among a small circle of dead advisers and has been exposed to those he perceives as disloyal, including Pence – whom Trump wanted to try to prevent Congress from certifying Biden’s gains – according to sources.