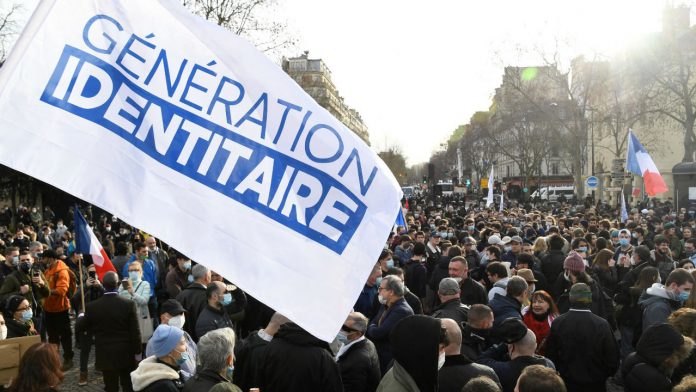 “The Génération Identitaire was dissolved this morning at a government meeting, in line with the president’s instructions,” Darmanin said on Twitter.

“As described in the regulation I presented, it encourages discrimination, hatred and violence.”

The “Identity Generation” association was dissected this morning by the Council of Ministers, in accordance with the instructions of the President of the Republic. As detailed as the decree I have presented, it encourages discrimination, haine and violence. Read 👇 pic.twitter.com/tfcQVC8AjX

Generation Identity has repeatedly tried to prevent immigrants from entering the country and carrying out high-profile raids in the Alps and the Pyrenees.

On February 13, Darmanin announced that he had triggered procedures to ban the group in response to a series of measures against migrants.

He had already raised the possibility of disbanding the right-wing group at the end of January when it deployed about 30 activists at the Spanish border, with cars with the message “Defend Europe” and the use of drones to police the border – the latest in a series of stunts Generation Identity has been used to attract the attention of the French public.

‘A declaration of war’

The organization first made French headlines in 2012 with an online video entitled “A declaration of war”. A group of young people filmed in close-up told the camera that they were the generation that had seen an “ethnic divide” and a “bankruptcy” experiment in “living together” that included “forced miscegenation”.

One month later, they acted for the first time by occupying the roof of a mosque under construction in the central French city of Poitiers and using the building to display banners against immigrants. When President François Hollande’s government considered closing Generation Identity in response to this, it did not.

The group continued with shock tactics for the next few years – including blocking the road that connects the migration camp “Calais jungle” with the city center in 2016 and by letting one of its members infiltrate NGO SOS Méditerranée, which helps migrants in mortal danger, 2018.

But Generation Identity’s biggest advertising stunt was when it launched a major operation in the Alps along the Italian border, an open border thanks to the EU’s Schengen agreement – and an important crossing for migrants. The activists wore blue jackets, made them look like policemen and gave the impression that they were hastening the role of the French state.

Three members were sentenced to six months in prison for the Alps in August 2019 – especially for disguising themselves as police officers.