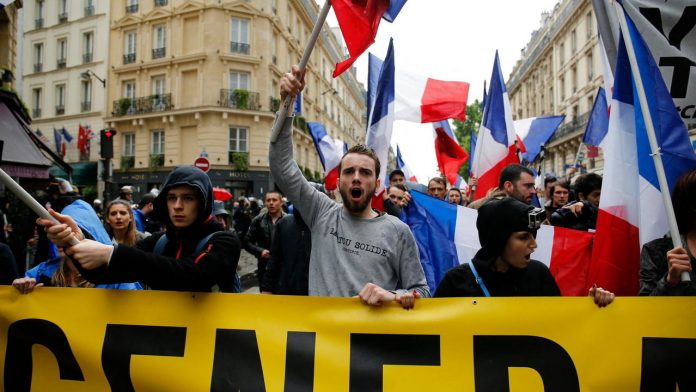 The center-right government of French President Emmanuel Macron launched proceedings to close the Generation Identity group on February 13 as it seeks to address right-wing extremism.

On February 16, the National Assembly approved a bill to combat Islamist extremism and separatism in an effort to address the root causes of jihadist violence – in response to a wave of attacks that have seen more than 250 people killed since 2015.

But Macron’s centrist government is also concerned about the right – especially when a poll by L’Express and Le Parisien in January put populist National Rally leader Marine Le Pen at 48 percent, compared with 52 percent for Macron during the 2022 presidential election.

On 13 February, the French Minister of the Interior, Gérald Darmanin, announced that he had triggered procedures to close down Generation Identity (Génération Identitaire) in response to a series of measures against migrants. The group appears to have violated a French law banning “calls to discriminate against a person or group on the grounds of origin,” Darmanin said.

He had already raised the possibility of disbanding the far-right group at the end of January when it deployed some 30 activists at the Spanish border, using cars with the message “Defend Europe” and the use of drones to police the border – the latest in a series of stunts Generation Identity has been used to attract the attention of the French public.

‘A declaration of war’

The organization first made French headlines in 2012 with an online video entitled “A Declaration of War”. A group of young people filmed in close-up told the camera that they were the generation that had seen an “ethnic divide” and a “bankruptcy” experiment in “living together” that included “forced miscegenation”.

One month later, for the first time, they began direct action by occupying the roof of a mosque under construction in the central French city of Poitiers, using the building displaying anti-immigrant banners. When President François Hollande’s government considered closing Generation Identity in response to this, it did not.

One group continued with shock tactics in the following years – including blocking the road connecting the “Calais jungle” migration camp to the city center in 2016 and by infiltrating one of its members in the NGO SOS Méditerranée, which helps migrants in danger of death by the sea, 2018.

But Generation Identity’s biggest advertising stunt was when it launched a major operation in the Alps along the Italian border, an open border thanks to the EU’s Schengen agreement – and an important crossing for migrants. About a hundred people were involved in the operation, set up plastic fences, uncovered a giant banner and used two helicopters to check the border. The activists were wearing the same blue jacket, which made them look like police officers and gave the impression that they were assimilating the role of the French state.

This operation cost about 10 percent of Generation Identity’s budget – estimated at about 300,000 euros and consists mainly of donations from the group’s members and supporters.

Three members were sentenced to six months in prison for the alpine trip in August 2019 – especially because they disguised themselves as police officers.

Generation Identity’s stunts were effective in capturing the public’s attention, wrote Stéphane François, a right-wing expert at the École Pratique des Hauts Études in Paris, on the website of the political analysis Conversation: “Their goal is to get people talking about them – and they have done so by inviting journalists to cover their events, as well as getting publicity through their website. ”

The organization is particularly good at using film techniques as a public relations tool, the French weekly Le Journal de Dimanche stated: “At their events, they film in such a way that they portray their members as more than they really are. They also strategically place female members – who are in the minority – in front of their meetings. Generation Identity is also keen to ensure that their members are relatively well-dressed for the cameras – especially compared to the archetypal right-wing extremist skinheads. ”

The group emerged from the ashes of a former French right-wing extremist group, the Radical Unit (Unité Radicale) – which was closed in 2002 after one of its members tried to assassinate then-president Jacques Chirac. Unsurprisingly, this made the group toxic in French public opinion, so several of its members set up a new organization, the Identity Bloc (Bloc Identitaire), which sought to portray itself as less extreme by killing its predecessor’s intended anti-Semitism.

Generation Identity was originally the youth branch of this movement – but it has slowly gained independence and prominence over the past two decades.

Resolution ‘would not solve anything’

Despite their headlines and the manipulated manipulation of their image, Generation Identity has only about 800 activists, according to Jean-Yves Camus, an expert on the French far-right at the Fondation Jean Jaurès think tank in Paris.

But the group has had some support from several members of the National Rally, including party spokesman Sébastien Chenu, who dismissed the prison by Generation Identity activists in 2019. However, Le Pen opposed Darmanin’s plan to close the group when he first raised the idea in January: ” “Darmanin should not get rid of organizations just because he does not like them – the rule of law does not work that way,” she said.

Generation Identity rejects the traditional French Republican approach that treats its citizens as simply French, regardless of their origin. The group sees European ethnic identity and European cultural identity as inseparable. “Such ideas are spreading across the continent,” wrote François.

The fear that this ideology is becoming more common led several associations to demand the dissolution of Generation Identity. The Paris-based international league against racism and anti-Semitism has long called for it to be closed and labeled the group as a “private militia”. The association wrote on its website that it is “no coincidence that the Christchurch terrorist responsible for the massacre in New Zealand in 2019 was on the list of Generation Identity donors”.

But Camus doubts that closing down Generation Identity will work: “It would not solve anything” and would “ignore the big right-right issue – the National Rally rise and that 48 percent for Marine Le Pen in the presidential election” 2022 ”, he wrote in Charlie Hebdo.

“Generation Identity can also find the means to resurrect in another form, and deny all the benefits of shutting it down,” Camus concluded.