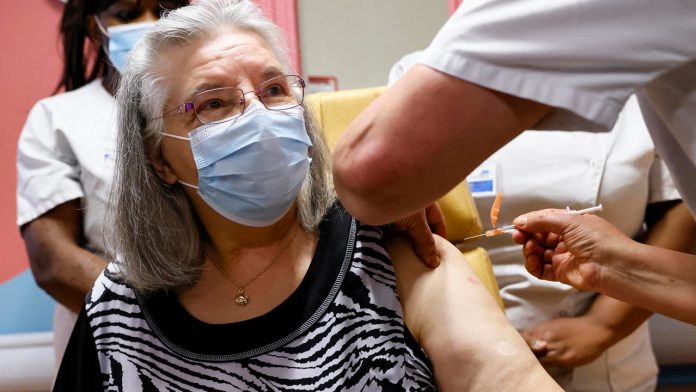 A 78-year-old woman became the first person to be vaccinated against Covid-19 in France when she received the country’s first dose at the René-Muret hospital in Sevran, Seine-Saint-Denis, outside Paris, according to an AFP journalist on the spot.

“I’m moved,” said the woman, whose only name is Mauricette, a former housekeeper who was vaccinated with the Pfizer-BioNTech vaccine around 11 a.m. on Sunday in the long-term ward of the public hospital. She smiled and was applauded by hospital staff after getting a jab.

A 65-year-old cardiologist, Dr. Jean-Jacques Monsuez, was next to be vaccinated just before 11:20 p.m.

About 20 elderly and medical staff are scheduled to receive the vaccine on Sunday during France’s symbolic launch of the program in Sevran as well as in a geriatric care center in Dijon.

Martin Hirsch, head of the public hospital group APHP, tweeted a picture of a woman who received the vaccination on Sunday morning and wrote: “A little jab from the nurse, a big step for immunity, we hope.”

The French government aims to initially vaccinate one million people – consisting of the elderly, vulnerable individuals and healthcare professionals – against Covid-19 by the end of February in the country’s 7,000 nursing homes and associated facilities.

EU countries on Sunday launched the vaccination campaign, which was hailed as the “key” to defeating Covid-19, as the growing spread of a new variant of coronavirus intensified fears of a pandemic could lead to further devastation.

Jab is a glimmer of hope for a continent that is still fighting the pandemic in earnest, with infection rates on the rise again, lockdowns introduced and Christmas and New Year plans left in the pipeline for many.

The numbers vaccinated during the first days of the program with Pfizer-BioNTech jab are largely symbolic and it will be months before they are adequately protected to imagine a return to normal from the pandemic that has killed 1.76 million people worldwide since arrived in China at the end of last year.