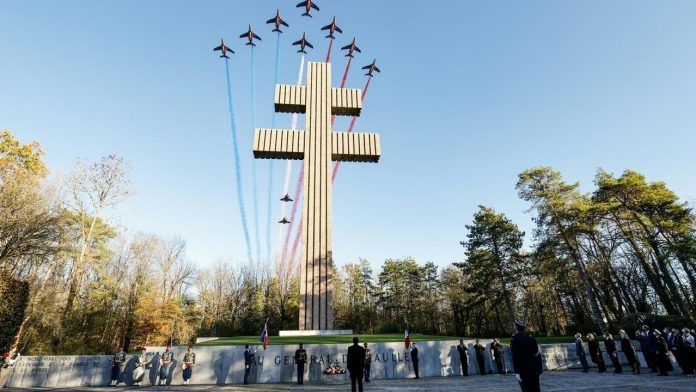 Fifty years ago, Charles de Gaulle, France’s greatest leader since Napoleon, died suddenly in his armchair in the humble home where he had retired to live the quiet life he had always longed for.

French President Emmanuel Macron made the well-worn pilgrimage to the northeastern village of Colombey-les-Deux-Eglises on Monday to hire the man credited with restoring pride to France after World War II disaster.

“Will and resilience were what Charles de Gaulle was all about,” Macron tweeted afterwards after silently paying tribute to his grave.

“And the spirit has left a legacy – France,” he added.

Even half a century later, France’s fascination with the general – known as the “giraffe” for its high frame – shows no signs of abating.

The country has uploaded a new film and television series that charts his stubborn opposition to the Nazis during World War II – as well as to his allies, the United States and Britain – often against the biggest odds.

The British Prime Minister Winston Churchill during the war, who helped de Gaulle establish himself as the leader of the Free French, once joked that he had to constantly remind the French general that the enemy was Germany.

“If he were to follow his own slope, it would be England,” Churchill said.

But even Churchill did not doubt that de Gaulle – whose warrior Irish ancestor Owen McCartan had been hanged, drawn and quartered by English – was a “great man”.

No less than 20 new biographies and studies of de Gaulle’s personality have also been published ahead of the anniversary.

Some have focused on the sensitive side of the military and the political colossus – he would spend hours playing and singing with his youngest daughter Anne, who suffered from Down syndrome.

This is in contrast to his ruthlessness in steering France out of the bloodbath of the Algerian War of Independence and his ability to survive street protests against him in May 1968.

‘France is a widow’

It was at 19.00 on 9 November 1970, at his home in Colombey-les-Deux-Eglises, de Gaulle complained to his wife Yvonne about a painful back.

He had written his memoirs, which he would never complete.

He collapsed his head in his hands in his armchair. The great statesman suffered an aneurysm in his abdomen.

Just 18 months earlier, he had resigned as president after serving as head of state for the second time from 1958 to 1969, after losing a referendum.

His death was kept secret all night. Only his children heard.

His successor, President Georges Pompidou, was told at 7:20 a.m. the next morning.

There was no official announcement. At 9:41 a.m., AFP broke the news with a short line: “De Gaulle is dead.”

On the streets, in offices – the news spreads like wildfire. Condolences were pouring in around the world.

“France is a widow,” Pompidou said at noon in a television address to the nation.

De Gaulle’s funeral took place on November 12 at Colombey-les-Deux-Eglises. In the crowd, at his request, there were no heads of state or government ministers, just ordinary citizens.

The funeral procession, dragged by the family, slowly made its way to the village church where de Gaulle had attended Sunday’s Mass days earlier. A silent audience watched.

The coffin was taken by 12 volunteers to the cemetery adjacent to the church, where it was buried next to his daughter Anne, who died at the age of 20.

A simple engraving marks the white marble in his tombstone: “Charles de Gaulle 1890-1970.”