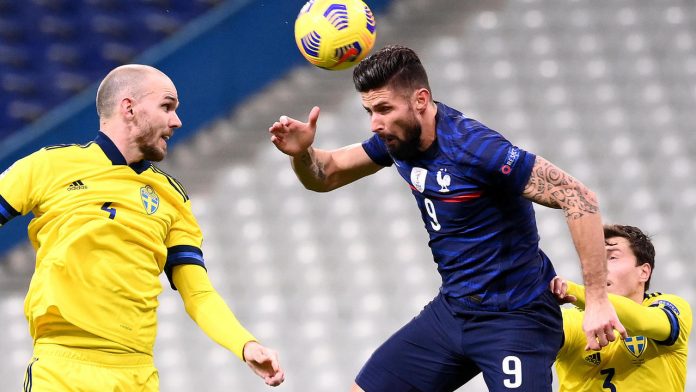 Striker Olivier Giroud did twice to approach the French national team’s points record when the Nations League group winner beat Sweden 4-2 and moved it on Tuesday.

Giroud’s total of 44 goals places him seven behind France and Arsenal’s big Thierry Henry’s record of 51.

“It always feels like he has to prove himself, he scored two good goals,” said France coach Didier Deschamps, praising Giroud. “We are not talking about a player who has never done anything until now. People are often too harsh on him. ”

The undefeated France had already booked their place in the Final Four after securing the top spot in League A, Group 3, with a 1-0 victory against the defending champions Portugal last Saturday.

France finished with 16 points from a possible 18 and Deschamps praised his players for doing so in a considerably tough group.

“I am a very objective person. No other team has done or will do better. We had the second place of the World Cup (Croatia) in our group and the reigning European champion (Portugal), he said. “Not everything was perfect, so we should not brag, but you must also appreciate what we have done. We finished with panache, bravo to my players. ”

Croatia stayed in the top league despite losing 3-2 against Portugal at home, which means that Sweden ended up on goal difference behind the Croatians.

The Swedes took the lead at the Stade de France in the fifth minute when midfielder Viktor Claesson broke into the area, skipped two tackles and hit a shot that cut defender Raphael Varane and the wrong-footed goalkeeper Hugo Lloris.

Marcus Thuram – son of the famous France defender Lilian Thuram – was involved in both goals when Giroud equalized in the 16th and right-back Benjamin Pavard put Les Bleus ahead in the 36th.

After Giroud started a counterattack from midfield, the ball was fed to Thuram on the left and his exact cross was turned adroitly in the lower left corner by Giroud.

Thuram then showed good footwork to weave past three defenders in the area and spin around a fourth. Although he lost control of the ball, it broke to Pavard to the right of the area and he drilled it firmly into the bottom left with the outside of his foot.

Giroud, who has barely played for Chelsea in the Premier League this season, should have scored when he nodded Pavard’s post from the right at the 53rd mark.

But he made no mistake six minutes later and met substitute Kylian Mbappé’s post from the left with a diving head. Then Giroud almost put Antoine Griezmann up and steered a pass with the chest that Barcelona flamed forward over the crossbar in the 75th.

Substitute Robin Quaison gave the Swedes hope to save a draw when he bundled left-back Pierre Bengtsson’s cross with two minutes left in regular time.

When every Swedish player, including the goalkeeper, camped around the goal for one last gasp corner, France cleared the ball and Kingsley Coman ran through from midfield to roll the ball to an empty net from 40 meters out with the game’s last kick.