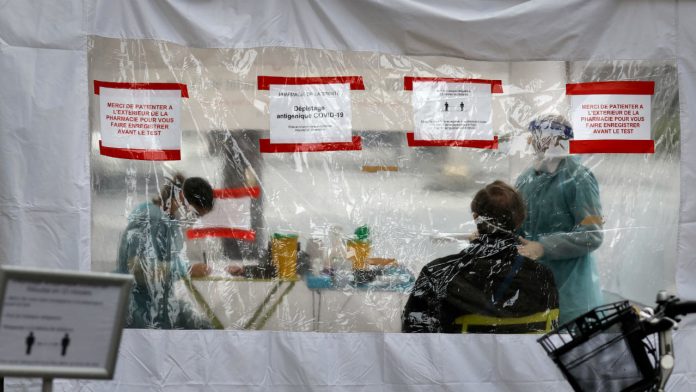 The French cities of Le Havre on the Normandy coast and Charleville-Mézières, near the Belgian border, are conducting mass covid-19 test campaigns on Monday in the country’s latest attempt to stop the spread of the disease before the holidays and the end of France’s second lock on Tuesday.

While the French will be able to circulate freely throughout the country without having to document their progress with administrative permits, the number of new daily coronavirus infections is still well above the government’s target in mid-December.

In a TV address in late October that set the course for a new Covid-19 lockdown, President Emmanuel Macron said he hoped the figure “over time” would drop to 5,000 infections per day. But the daily average over the past week has been 12,000 new infections.

The death toll from the coronavirus pandemic in France is almost 58,000, including almost 40,000 in hospitals.

The French government is now investing in a new, more targeted strategy with mass testing in an attempt to stop the spread.

“These operations are as much a way of limiting the spread of the virus in the affected urban areas as a way of testing our ‘test-alert-protect’ strategy, which you see evolving,” Health Minister Olivier Véran said on Thursday.

The 270,000 residents of the greater Le Havre area have been invited to be screened for coronavirus from Monday to Friday this week. The screenings will be available “without agreement and free of charge, with a result within half an hour,” Le Havre mayor and former prime minister Edouard Philippe told the Journal de Dimanche.

“In Liverpool, they managed to test about a third of the 500,000 inhabitants in four days. If we tested 50 percent of the population, I would be the happiest man! We will probably fall short of that,” Philippe said.

Meanwhile, French health authorities in the Ardennes are focusing on testing the inhabitants of the department’s two capitals, Charleville-Mézières and Sedan, around 123,000 people.

“Respecting the health protocols alone is not enough to break the spread of the epidemic. It is impossible for the holiday season to generate a third wave, which would be formidable in our area,” said the city’s joint authority, Ardenne. Metropole.

The initiative in Eastern France will run until Friday, as well as from 21 to 23 December and 28 to 30 December. The surveys there must also be free, appropriate and carried out without agreement.

Two other cities, Saint-Etienne and Roubaix, are scheduled to conduct similar mass test operations in January. Both have been among the places in France that have seen the coronavirus circulate the most.

Epidemiologists say that mass testing is only helpful if the results are used quickly, with those testing positive isolation and with limited social contact in the worst affected areas.

However, isolation will not be implemented as in some other countries. Instead, Normandy’s regional health agency said there would be “individual support, in particular to isolate as quickly and as efficiently as possible”.

Tuesday is officially the end of France’s second Covid-19 shutdown, which will allow for curfews from 8pm to 6am every day, with an exception made on December 24, Christmas Eve.