Home NEWS France, Mali is at odds over whether to talk to jihadists in...
Facebook
Twitter
WhatsApp
Linkedin
LINE 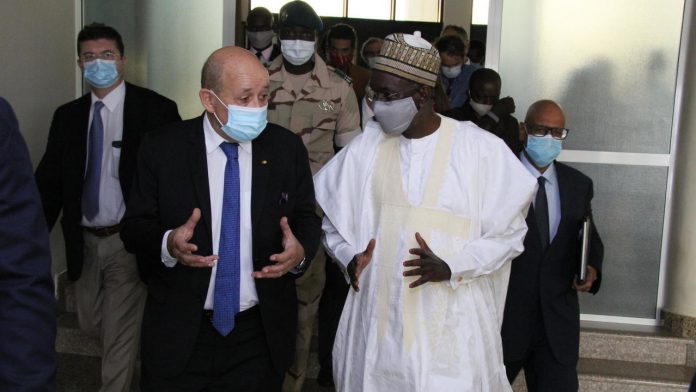 France and Mali differ on Monday on whether to talk to jihadists to help end the Sahel’s eight-year-old uprising, with French Foreign Minister Jean-Yves Le Drian ruling out the possibility.

During a press conference in the capital Bamako, Le Drian distinguished between engaging with armed groups that had signed peace agreements and “terrorist groups”.

“Things are simple,” he said.

Le Drian told AFP that the reason for his visit was to “establish a relationship of trust with the new authorities”.

Following international pressure, Mali handed over the military junta to a caretaker government set to hold elections within 18 months.

Le Drian said his stance on dialogue was shared by the UN Security Council and the G5 Sahel countries – a regional anti-jihadist force that includes Mali.

But Mali’s interim prime minister, Moctar Ouane, quickly disagreed with him in a sign of a political divide between the Sahel state and France, the former colonial power.

He pointed out that a forum on Mali’s crisis last year, which brought together local leaders, “had very clearly indicated the need for an offer of dialogue with (jihadist) armed groups.”

Mali’s coup came after waves of anti-government protests, driven in part by Keita’s inability to end the brutal uprising.

Conflict has raged in Mali since 2012 and has killed thousands of soldiers and civilians.

Intense fighting continues despite the presence of French and UN troops, leading many to argue that dialogue with jihadists is the best way to end the bloodshed.

Ouane told reporters that the dialogue offered “an opportunity to initiate a huge discussion with communities to define the contours of a new government,” he said without further details.

Referring to France, however, Ouane warned: “This will require synchronization and coordination with our partners, especially those involved militarily.”

The French government promised in January to intensify its military involvement in the Sahel and designated the Islamic State group as its “number one” enemy in the region.

Keita’s government, under national pressure to resolve the conflict, said shortly after it was ready to speak to groups linked to al-Qaida that are in conflict with Islamic State.

It is unclear to what extent the Keita government engaged al-Qaeda-linked jihadists before the army overthrew him in August.

Jean-Herve Jezequel, an analyst at the International Crisis Group (ICG) think tank, explained that Sahel jihadists are “rooted in their community, which is sometimes sympathetic to them”.

They are also increasingly involved in local affairs, which is why many are “trying to explore dialogue,” he said.

Informal contacts between the new government in Bamako and jihadist groups are apparently already underway.

This month, the government swapped around 200 detainees – many of them believed to be jihadists – for four prisoners being held by Islamist groups, including 75-year-old Sophie Petronin, the last remaining French hostage in the world.

Le Drian’s visit also comes at a time when world leaders seem to be considering the possibility of jihadist talks.

UN Secretary-General Antonio Guterres told the French daily Le Monde in September “there will be groups we can talk to who will be interested in engaging in dialogue to become political actors in the future”.

Shards in Mali, a large West African nation with about 19 million people, are outside government control.

France has 5,100 troops deployed across the Sahel region as part of its anti-jihadist operation Barkhane.

The United Nations has about 13,000 troops deployed in Mali as part of its peacekeeping mission, known as MINUSMA.