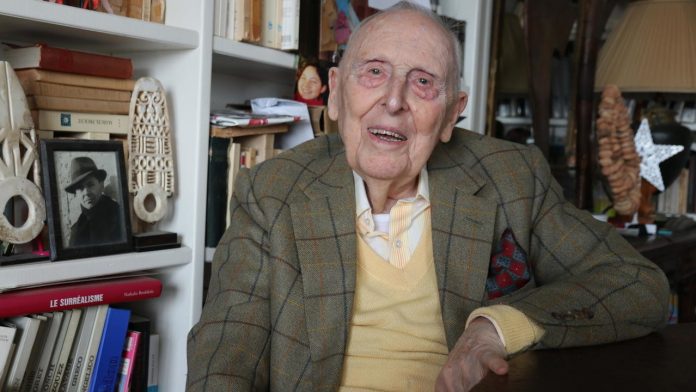 On Monday, France pays tribute to one of the last companions of liberation, the most prominent order of resistance heroes decorated by Charles De Gaulle. Daniel Cordier, who served as secretary to the iconic French resistance leader Jean Moulin during World War II, died last week at the age of 100.

Cordier was born in Bordeaux in 1920 and early became involved in politics with the far-right Action Française movement. A young admirer of the French ultra-nationalist figure Charles Maurras, the young Cordier was immersed in monarchist, nationalist and anti-Semitic ideas. By June 1940, when the French army was swept aside by the Nazi Wehrmacht, Cordier had not yet turned 20. He was outraged when Marshal Philippe Pétain demanded a ceasefire with Germany and the teenager decided to continue the fight.

“I ran up the stairs to my room because I did not want my parents to see me crying. I threw myself on my bed and sobbed so that France could not be beaten,” he told Jowharin a December 2017 interview. “After the tears, I decided to do something, but I still did not know what.” With about 15 volunteers, he left Bayonne, on the Atlantic coast, originally for North Africa. But the ship Cordier and his comrades on board would eventually take them to England.

Cordier joined the first French forces, organized by De Gaulle from his exile in Britain. “What you have to understand is that I am a child of combat veterans during the First World War. Deep down, that was what we wanted to do what our parents had done, no more no less,” he would explain.

After training in an infantry battalion, Cordier was assigned to the Central Bureau of Intelligence and Operations (BCRA), the secret service of the French French forces. In July 1942, he was flown near Montluçon in central France. Days later, he met Jean Moulin, codenamed “Rex”, who represented De Gaulle and was a delegate from the French National Committee, the French government in exile. Moulin took Cordier further to help establish his Lyon office.

After the arrest of the “boss” in June 1943 – whom Cordier called Moulin – in Caluire near Lyon, Cordier continued his mission. Continued by the Gestapo, Cordier fled through the Pyrenees. Interned in Spain, he was to return to England at the end of May 1944. There he was appointed to lead the section accused of airdropping BCRA agents.

Cordier was awarded the Cross of the Medal of Liberation on November 20, 1944 to show “the qualities of unparalleled devotion and courage.” He was considered to have worked “tirelessly throughout his long mission and never ceased to excel in his enduring energy, his selflessness, his sacrificial spirit, and his composure.”

Deep into Cordier’s old age, this difference had particular significance for the former resistance fighter. It was the only medal he wore each year on June 18 to celebrate Charles De Gaulle’s 1940s that his countrymen would resist the German occupation, issued by radio from London. “The only thing that was an absolute reward was to be a companion to liberation,” Cordier seemed to say.

‘Freedom is the sunshine of life’

Cordier renounced his early right-wing ideas – he later wrote about his shock and “unbearable shame” during the war when he saw an old man and a child in Paris adorned with the yellow stars that marked them as Jews – and became a socialist humanist.

After the war, Cordier devoted his life to his painting and began collecting contemporary art. In the early 1980s, he became a historian to defend Jean Moulin’s memory. In 2009, he published an autobiographical story entitled “Alias ​​Caracalla” that he considered a tribute “to all people who died”.

Cordier was regularly invited to attend conferences or meet with school children and still did not see himself as a role model. “I did what I believed in. I fought throughout the four and a half year war. I did everything I had asked for,” he said humbly.

Seventy-five years after the end of World War II, Cordier would say that “freedom is the sunshine of life.” “We must remain free throughout our existence. No one can afford to change our lives, to introduce a new vision,” he said. “We fought for freedom for almost five years. If it had to be done again, I would do it again immediately. It’s the only aspect of my existence that I’m sure I would do again immediately.”

A remaining companion of liberation

French President Emmanuel Macron praised shortly after the news of Cordier’s death and announced plans for Thursday’s ceremony in tribute. “Daniel Cordier, a member of the opposition, secretary to Jean Moulin, has passed away. When France was in danger, he and his comrades took every risk that France would remain France. We owe them our freedom and our honor. We will pay them a national tribute, “Macron wrote on Twitter.

After Pierre Simonet’s death on November 5 and Cordier’s death on November 20, only one living companion remains – and Hubert Germain is also 100 years old. About 1,038 people, including six women, received the title, as well as 18 military units and the five French municipalities of Nantes, Grenoble, Paris, Île de Sein and Vassieux-en-Vercors, the latter site of a brutally suppressed resistance uprising. of the Nazis.

It was decided that the last of the “companions” to die would be buried at Mont Valérien, the main site of the execution of resistance fighters and the hostages of the Germans during World War II. On the site, just west of Paris, is the Memorial to Fight France, inaugurated by De Gaulle in 1960.