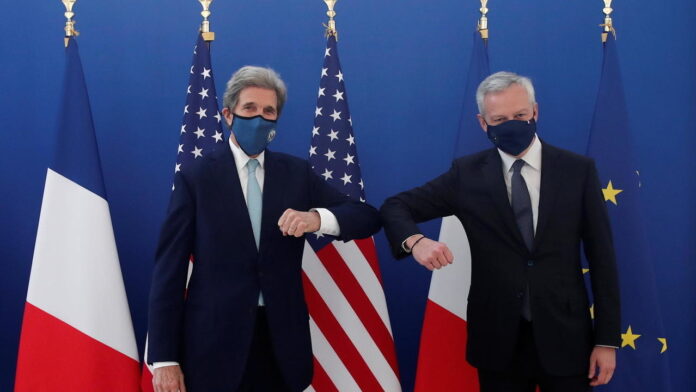 Europe and the United States should agree on common rules to determine how “green” a financial investment is, the French finance minister said on Wednesday after talks with US President Joe Biden’s climate envoy.

John Kerry, the US special envoy for climate change, is in Europe this week to resume transatlantic cooperation in the wake of Biden’s decision to rejoin the Paris landmark.

He visited the French capital on Wednesday, a day after telling EU officials in Brussels that the United States has no “better partner” than Europe in the fight against global warming.

During talks in Paris, French Finance Minister Bruno Le Maire called for a common taxonomy for green investment. He said it was important to start discussions with Washington on carbon dioxide tax adjustments.

Le Maire added: “It would be a source of significant confusion between our two continents.”

Kerry was asked to respond to the separate proposal for a carbon dioxide adjustment tax, saying Washington was aware that a number of countries were examining such a tool.

Such a tax mainly consists of import duties levied by carbon taxing countries on goods manufactured in countries that are not carbon taxed.

“There are a number of different proposals for awarding a price for coal and methane and greenhouse gases that create this damage,” Kerry told reporters. “Whether we think it’s the right tool or not, we have not yet been able to sit down and evaluate it.”

He added: “Our friends from France are planning to take a deep dive into it, which can be very constructive and we look forward to hearing from them.”

>> When he named John Kerry the top role, Biden shows that he is serious about the climate

The former US Secretary of State said that the signatories to the Paris Climate Agreement did not do enough to honor their commitments to limit global warming. He said billions of dollars were needed to finance the transition to a sustainable future, adding that it was possible to find that money with the help of the private sector.

The Climate Change Agreement from 2015 undertakes countries to present plans to reduce their emissions of greenhouse gases such as carbon dioxide, which are released from the combustion of fossil fuels. EU leaders reached a fierce battle in December to reduce the bloc’s net greenhouse gas emissions by at least 55 percent by 2030 compared to 1990 levels.

Like the EU, Biden has said that the fight against global warming is one of his top priorities. His administration has not yet announced a new national 2030 target to reduce fossil fuel emissions in the United States.