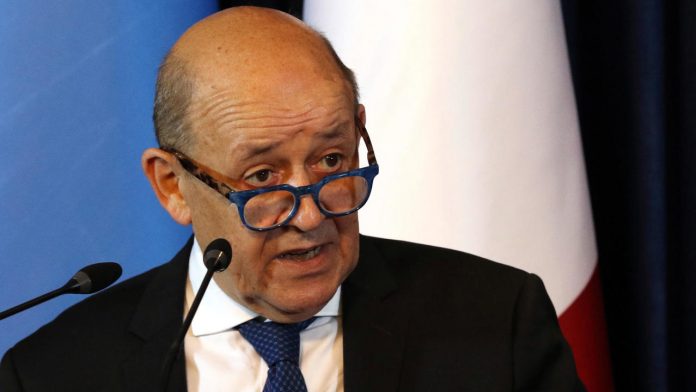 Iran is building its nuclear weapons capacity and it is important that Tehran and Washington return to a nuclear agreement in 2015, the French Foreign Minister was quoted as saying in an interview published on Saturday.

Iran has accelerated its breaches of the nuclear deal and began pushing further earlier this month with plans to enrich uranium to 20% fissile strength at its Fordow underground nuclear power plant. This is the level that Tehran reached before concluding its deal with the world powers to limit its disputed nuclear ambitions.

Islamic Republic’s violations of the nuclear deal since President Donald Trump withdrew the United States from it 2018 and then imposed sanctions on Tehran could complicate the efforts of President-elect Joe Biden, who takes office on January 20, to rejoin the pact.

“The Trump administration chose what it called the maximum pressure campaign against Iran. The result was that this strategy only increased the risk and the threat,” Le Drian told the Journal du Dimanche.

“This must be stopped because Iran and – I say this clearly – are acquiring nuclear capabilities.”

The main purpose of the agreement was to extend the time that Iran would need to produce sufficient fissile material for a nuclear barrier, if desired, to at least one year from about two to three months. It also lifted international sanctions against Tehran.

Western diplomats have said that Iran’s repeated violations have already reduced the “breakout period” to well over a year.

Iran denies any intention to arm its nuclear program.

With the presidential election in Iran in June, Le Drian said it was urgent to “tell the Iranians that this is enough” and to bring Iran and the United States back to the agreement.

Biden has said he will return the United States to the deal if Iran resumes strict compliance with it. Iran says sanctions must be lifted before reversing its nuclear offenses.

However, Le Drian said that even if both sides returned to the deal, it would not be enough.

“Tough discussions will be needed about ballistic proliferation and Iran’s destabilization of its neighbors in the region,” Le Drian said.

In the same interview, Le Drian also suggested that the European Union and the United States should “pause” a long-term customs agreement to resolve the issue.

A 16-year surplus of aviation subsidies has become increasingly sour during the Donald Trump administration and extended to other products and sectors, and France’s proposal comes before the inauguration of President-elect Joe Biden in the coming week.

“The issue that poisons everyone is the price increases and taxes on steel, digital technology, Airbus and especially our wine sector,” says Le Drian.

“If we could quickly find a way to resolve this dispute with Europe and France, it would be a step forward,” he said. “It may take time but in the meantime we can always order a break.”

At the end of the year, Washington announced new tariffs on aircraft parts, wine, cognac and brandy from France and Germany, which added a long list of EU products with 25 percent tariffs since 2019.

The United States said the measure was in retaliation for tariffs imposed by the EU in November, which it considers unjustified and calculated unfairly.