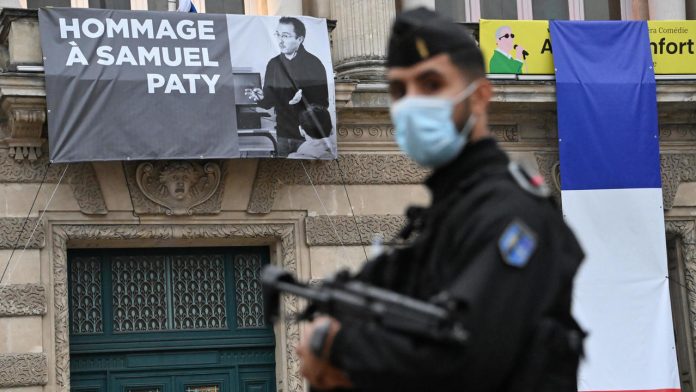 French schools reopened on Monday for the first time since the beheading of a teacher who opened a class debate on free speech by showing students’ caricatures of Islam’s prophet in mourning and under tight security for a national tribute.

Samuel Paty was killed on October 16 outside his school in the suburbs of Paris by an 18-year-old refugee of Chechen origin for punishing him for showing the cartoons published by the satirical newspaper Charlie Hebdo, which triggered a massacre in the editorial office in January 2015 .

Since their re-release in September at the start of the ongoing Paris trial over the killings, France has been the target of three attacks accused of Muslim extremists: one by a Pakistani refugee who wounded two people outside the newspaper’s old headquarters, the schoolteacher’s killing and a deadly knife attack last Thursday in a church in the Mediterranean city of Nice. All three have prompted terrorist investigations and France is now at its highest level of alarm.

French President Emmanuel Macron promised to increase the protection of schools and churches immediately after the Nice attack and more than double the number of soldiers actively deployed in the country. Paty was killed at the start of a two-week French school holiday.

On Monday, the school where he taught Conflans-Saint-Honorine opened only to teachers. The Prime Minister of France, Jean Castex, arrived to provide support. Other schools across the country resumed as usual for both students and teachers.

In schools across the country, students will read the letter from Jean Jaurès, a 19th-century French thinker and politician, to instructors urging them to teach the country’s children to “know France, its geography and its history, its body and its soul.”

Macron has defended the decision to publish the cartoons, which he says falls entirely into two of France’s most beloved rights: freedom of speech and secularism. The comics were originally published in Denmark in 2005 and elsewhere later in countries where freedom of expression is considered inviolable. Many Muslims see them as saints.