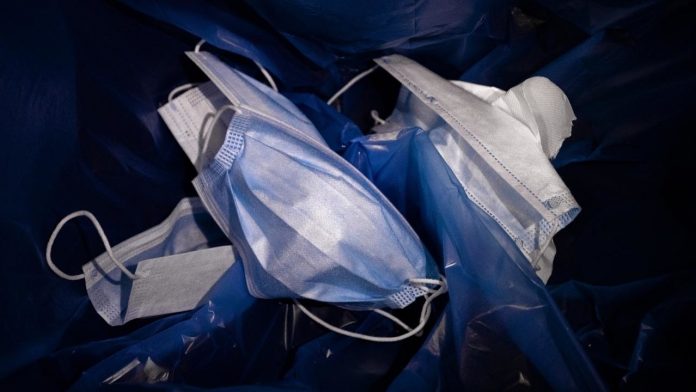 Edmund Platt, a British environmental activist, and his French photojournalist friend Frédéric Munsch set off on October 1 to follow the TGV high-speed train line to the French capital, aiming to open people’s eyes to the extent of everyday pollution.

“We ended up with 6,300 masks,” Platt told AFP in Paris, speaking French with barely a trace of an accent after living in the country for several years.

The couple walked 880 kilometers in total, with a French and a British flag on their backs, camped outside or stayed in people’s homes when they pointed the mask after the mask on long sticks.

They also carried bags to pick up other debris, including fast food containers, newspapers and even a license plate.

A series of media interviews turned them into mini-celebrities along the way, easily visible in their fluorescent orange safety vests as they showed off their daily features.

“All these masks come from just a few kilometers, we have 250,” Munsch told a resident who peeked out of the window on the first floor of Melun, just south of Paris, a few days before the couple arrived in the capital on Saturday.

“What we want people to do is just slow down a little and stop throwing so much,” said Platt, who calls himself “the English snail.”

As part of their campaign, they collaborated with an anonymous street artist based in Nice, known as “Toolate”, to advertise their work with framed portraits of masks hanging above mailboxes over Paris.

“Here is a jackass-blue surgical mask that is thrown on the ground, measuring 16 centimeters by 7 centimeters. Artist: Unknown, ”is the sign above a picture in the trendy Marais district.

“It’s a worm we found in a sewer grille, it was just the broken loop sticking out but I said, damn, it’s for me!” Platt explained.

After founding Un déchet par jour / 1 garbage movement several years ago, he saw the millions of disposable worms used since the Covid-19 pandemic began as a way to give new impetus to his campaign.

“The goal now is to get everyone involved, everyone picks up a piece of garbage a day,” he said.

On Friday, Platt and Munsch will host a “garbage apéritif” – a ball collection of drinks – outside Paris City Hall, which they hope will feature a performance by Mayor Anne Hidalgo, who has made the cleaning of the capital a priority.