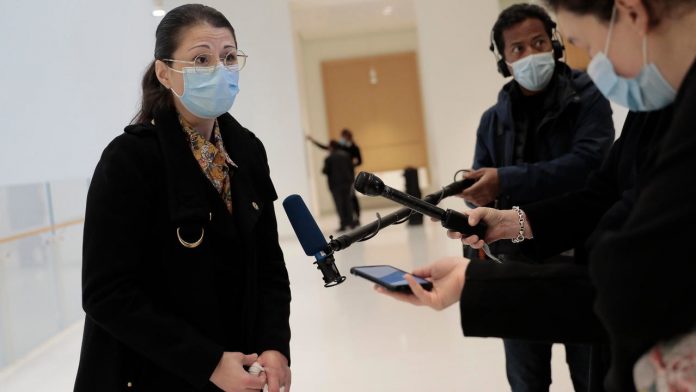 Family members of French nursing home residents began a legal trial in Paris on Wednesday to seek responsibility for the deaths of tens of thousands of loved ones from Covid-19.

A plaintiff lost his father in a nursing home last spring when the virus pandemic swept France. Another has been struggling for a year to keep his mother, isolated in another nursing home, from depression.

They are among several family members and advocacy groups that took part in a court in Paris on Wednesday in an unusual, collective legal attempt to get answers from French authorities and companies about their handling of the pandemic in homes for the elderly and disabled.

The families are trying to find out who can be held responsible after the virus took the lives of tens of thousands of French nursing home residents and families were locked out and left in the dark about what happened to their loved ones.

When defense attorneys tried to dismiss the legal effort as frivolous and shaky for procedural reasons, frustrated families in the courtroom gasped and sighed.

“Our parents are dying!” said Clara Bouaziz, whose father died early in the pandemic.

Wednesday’s hearing was the first step in a likely year-long legal marathon. Families hope it will shine what went wrong last year when the virus destroyed France’s oldest generation and deprived their children and grandchildren of a chance to help or even say goodbye.

“We want to make sure that mistakes are not repeated, that someone is held responsible,” said plaintiff Sabrina Deliry, who has mobilized families around France since her mother’s nursing home in Paris was first locked up a year ago.

The hearing involved a special measure to demand access to documents or other material relating to decisions in nursing homes. It is among dozens of lawsuits surrounding the alleged poor management of the pandemic operating through the French judiciary, along with similar efforts in neighboring Spain, Italy and beyond.

The French procedure is directed at several nursing homes, the national health authority DGS, the Paris authority and others. The plaintiff includes family members of nursing homes, doctors and associations.

Their complaints focus on several issues in French homes for the elderly and disabled during the first half of 2020: lack of masking for residents and staff; testing of defects; the use of a powerful sedative called Rivotril on some residents while homes were locked; and opaque decisions about which residents received hospital care for the virus – and which were left to suffer or die in their nursing homes.

A dozen defense attorneys spoke at the hearing, arguing that the families were asking for documents that did not exist or documents protected by medical confidentiality regulations, or that their clients did nothing wrong. They focused on technical issues and did not address the major issues of pandemic mismanagement.

Paul-Albert Iweins, who represents the National Public Health Agency, said it was a long time to dig for the documents that families want to take a lot of time for the agency’s small staff; it would be “infinitely better to fight the pandemic.”

A first decision in the case is expected on June 9.

France shut down nursing homes soon after the outbreak

After France registered Europe’s first viral infections and deaths a year ago, French officials closed nursing homes to outsiders and detained residents. The government said it must act quickly to protect the country’s most vulnerable populations. However, many families say that the closure deprived them of the decision-making ability of their loved ones, and that in some cases the isolated isolation weakened cognitive and other health problems.

President Emmanuel Macron recognized these concerns and relaxed some rules for nursing homes, especially when France’s first lock was eased. But for many, the damage had already been done. And new waves of infection during the summer, fall and winter sent many nursing homes back to temporary, repeated shutdowns.

French officials say the lack of masks at the beginning of the pandemic was beyond their control and a global problem, noting that masks have been mandatory and widely available since last summer. Nursing directors have defended their decisions to lock out visitors in view of their residents’ vulnerability, and some have sought compromise solutions to ease the burden on the elderly.

Official figures show that almost 25,000 people with the virus have died in French nursing homes out of more than 87,000 lives lost nationwide – a death toll still climbing by the hundreds every day. But thousands of other French caregivers who received COVID-19 died after being hospitalized, and studies suggest that they make up as many as half of France’s total virus victims. It is among the highest proportions worldwide.