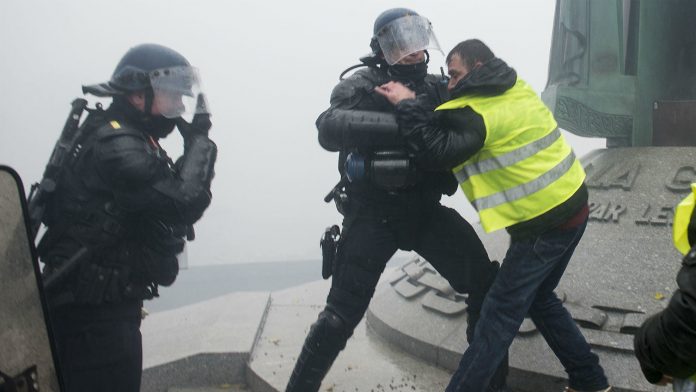 Under the protection of press freedom groups over a bill aimed at restricting the recording of police officers on duty, France’s interior minister has gained further momentum by telling reporters who want to cover demonstrations to warn authorities in advance.

Gerald Darmanin told a news conference on Wednesday that such earlier statements could “avoid confusion” if police were forced to take action against troubled protesters.

But journalists’ unions say it could give the police the green light to prevent them from doing their job and possibly document abuses by security forces.

Darmanin’s comments came as a France Television journalist was arrested on Tuesday while covering a protest against a new security law outside parliament in Paris that would restrict the publication of photos or videos taken of police faces while in action.

The journalist was kept overnight and only released around noon on Thursday, and other journalists also said they had been prevented from filming arrests when police broke up the demonstration.

The new law would criminalize the publication of images of police officers with the intention of harming their “physical or mental integrity. In many cases, an officer’s face must be erased.

French police have been in focus in recent years for alleged brutality shown to protesters as well as criminal suspects, especially those from black or Arab minorities.

A series of incidents captured on video and spread on social media have led to talks and many demonstrations for police reform.

But police say they risk a major personal threat in the line of duty, and dozens have been injured in clashes with violent protesters in recent years.

An attack on a police station outside Paris last month by dozens of people armed with fireworks and steel bars forced the government to take concrete action.

Darmanin, a strong defender of the controversial new “comprehensive security” bill, said on Wednesday that journalists should declare to the authorities “to make themselves known, to be protected by the police … to do their job as journalists during protests.”

He later clarified in a tweet that this was not an obligation, but the press union still expressed fear that his statement would send the wrong message to the police who were looking for an excuse to interfere in their reporting work.

Free press advocates are planning demonstrations in Paris and elsewhere in France on Saturday.

The UN Human Rights Council has warned the Security Bill, if approved, “could deter, even punish those who can provide parts of potential human rights violations by law enforcement, and provide a kind of immunity.”

France’s human rights watchdog has also warned of “significant risks” from the new law, saying: “Publishing images of police interventions is legitimate and necessary for a democracy to work.”