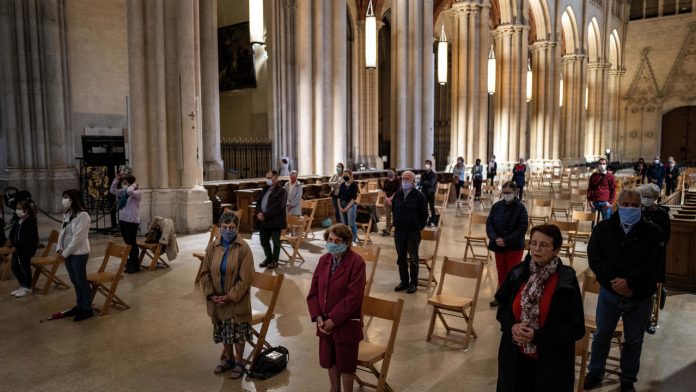 On Sunday, the French prime minister, the country’s highest court, ordered the government to review a law restricting the number of people in churches during worship services to 30.

The Council said in a statement that the measure was not proportionate to the risks of coronavirus infection.

Last week, the government announced that a nationwide lock in place since October 30 would be phased out.

Stores selling non-essential items were allowed to reopen from Saturday and indoor religious services were also resumed, but the number of worshipers has been limited to 30 people, regardless of the size of the worship.

Catholic organizations have challenged the border and claimed that churches and cathedrals are much more spacious than shops, where the border is one person per eight square meters.

“When you see the pictures from yesterday’s demonstration with this densely packed crowd and think that in large churches there can only be 30 people, it’s absurd,” the Bishop of Nanterre, Matthieu Rouge, told BFM TV, referring to Paris protests against Article 24 of the “Global Security” Act.

The French government denied that Catholic believers were stigmatized.

France is “not the only country” that has taken this type of action, said Pascale Leglise, a spokesman for the Interior Ministry.

She said it was pointless to compare business and worship.

“In a store, people pass by, do not talk to each other, do not sit next to each other,” she said, noting that theaters, cinemas, bars and restaurants remained closed.

“Thirty people (in a place of worship) is not much,” Leglise admitted, adding that worship could “hold more Masses – not just on Sunday mornings.”