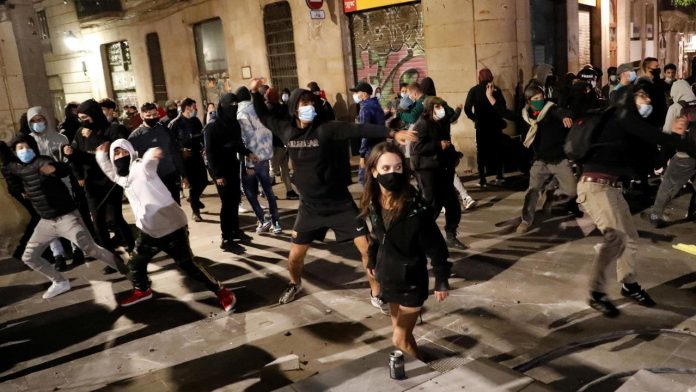 Protesters in several Spanish cities clashed with security forces another night over Saturday, police said as England prepared for new home orders following the steps of Austria, France and Ireland.

European governments are desperate to stem the worrying rise in infections on the continent, which has registered more than 279,000 deaths since the virus first appeared in China in late 2019.

In England, many expressed concern about the financial cost of the four-week shutdown, which is due to take effect from Thursday, although it will not be as strict as before with schools and universities being allowed to remain open – as in France.

“This city will collapse, there will be nothing left of it,” said Roger Stenson, a 73-year-old pensioner in the city of Nottingham, who reiterated widespread concern over the long-term impact of another shutdown.

“I fear for the young, as my own grandchildren and great-grandchildren, they will suffer.”

In Spain, the anger that spread on the streets overnight on Saturday saw looting and vandalism in some cities.

The country has introduced a nationwide night ban, and almost all regions of Spain have implemented regional border closures to prevent long-distance travel.

The biggest disturbances were in Madrid, where many protesters shouted “freedom!” burned trash cans and put up makeshift barricades on the city’s main road, Gran Via, showed pictures on social media.

Italy was also the site of protests last week.

But the government is still expected to announce new restrictions on Monday, according to news reports.

These are expected to include a ban on cross-regional travel, the closure of shopping centers at weekends, the restriction of commercial activity and the introduction of a previous curfew.

“What worries me is the absolute figure showing a scary curve. Either we bend it or we’re in trouble,” he said.

Restrictions also led to unrest in Argentina, where riots took place in several prisons in Buenos Aires province on Saturday as prisoners demanded the resumption of visits to the pandemic.

The health situation is also deteriorating in the United States, which is preparing for a major election rally between President Donald Trump and his Democratic candidate Joe Biden on Tuesday.

Already the worst-hit country with 230,586 deaths, it also registered 776 new deaths on Saturday, the largest number in the world according to an AFP figure from official sources.

“All the stars are in the wrong place,” he said.

The hugely popular Halloween party was a muted affair this year, especially in Salem, Massachusetts.

The coastal town, which infamous witch hunts in the 17th century, is a draw for chill-seekers, and while gloomy harvesters, mad scientists and tarot readers still paraded the streets on Saturday, authorities decided to close the town at 6 p.m. 20 to avoid crowds. .

In Germany, the sadness was palpable in the famous Bavarian State Opera House in Munich as it was ready to close due to closures in leisure, culture and food and drink.

There was speculation in France that the government might even prevent supermarkets from selling some “non-essential” items to protect small businessmen who have been forced to close.

The virus has killed at least 1,196,109 people worldwide since the outbreak occurred in December last year, infecting more than 46 million.