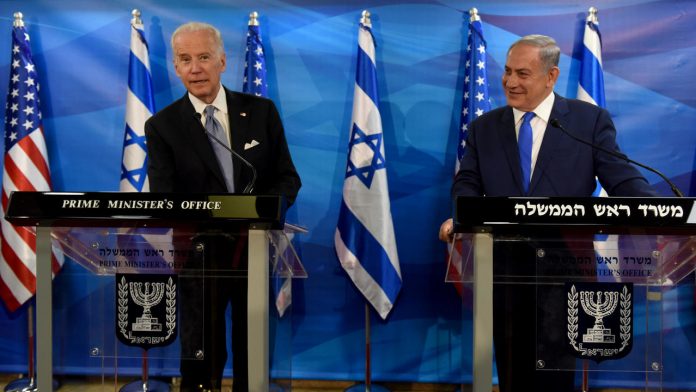 US President Joe Biden and Israeli Prime Minister Benjamin Netanyahu put all tensions to rest on Wednesday by finally holding their first phone call since the change of government in Washington.

Netanyahu was one of the last foreign leaders to receive a call from Biden, who took office on January 20, despite Israel’s special relationship with the United States.

But both sides stressed their close ties during the conversation, which Biden told reporters was a “good conversation.”

The White House said Biden registered “support” for a series of agreements mediated by mediator Donald Trump on the normalization of relations between Israel and Arab and Muslim countries.

And Biden “reaffirmed his personal history of a firm commitment to Israel’s security and conveyed his intention to strengthen all aspects of the US-Israel partnership, including our strong defense cooperation,” the White House said in a statement.

In a statement, Netanyahu’s media advisers called the lecture “very warm and friendly” and lasted about an hour.

“The two leaders noted their long-standing personal commitment” and agreed to strengthen the countries’ alliance, the statement added.

The Israeli Prime Minister and the President of the United States “discussed future progress on the peace agreements, the Iranian threat and regional challenges, and agreed to continue their dialogue.”

Placing Netanyahu far down the list was widely interpreted as Biden’s way of signaling a recovery in the United States and the Middle East after the Trump era.

The Republican often boasts of being what he called the most “pro-Israel” president in US history. He closely followed Netanyahu’s priorities, including moving the US embassy from Tel Aviv to the disputed city of Jerusalem – a move that many other countries consider provocative.

Biden has also made a point of cooling down the close personal relations that Trump has established with Saudi Arabia’s de facto ruler Crown Prince Mohammed bin Salman. The Democrat has not yet called the Saudis and says that when he does, it will be for King Salman himself.

The perception of a cold shoulder irritated Netanyahu’s Likud party.

And Nikki Haley, Trump’s former ambassador to the UN, accused the Biden administration of “stumbling” Israel.

On Tuesday, White House Press Secretary Jen Psaki insisted that Netanyahu was not ignored – but indicated that he was not exactly on the front burner.

“Let me confirm to you that his first conversation with a leader in the region will be Prime Minister Netanyahu,” she said. “I do not have an exact date for you but it is soon.”

Despite the normal nature of the phone call, Biden’s Mideast agenda is already taking a sharp turn from the one that made Trump so popular with Netanyahu.

Crucially, Trump withdrew from a 2015 agreement between Iran and the world powers to keep Tehran’s nuclear industry under close scrutiny in exchange for relaxing crippling sanctions against the country.

This pleased Israel, which insists that Iran cheated the deal and worked against a nuclear weapon – something that the Iranians denied.

Biden has come to his office and declared that he wants to return to business in some form and calls Trump’s “maximum pressure” campaign against Iran a failure.

In Wednesday’s phone call, “Biden also praised Netanyahu for his leadership in the fight against the coronavirus,” the Israeli premiere’s media adviser added.

Israel has advanced in its vaccination against Covid-19.

The country of about nine million people on Tuesday delivered a shot of the Pfizer / BioNTech vaccine to its four million inhabitants.

More than 2.6 million of them have already received the second jab recommended for maximum protection.