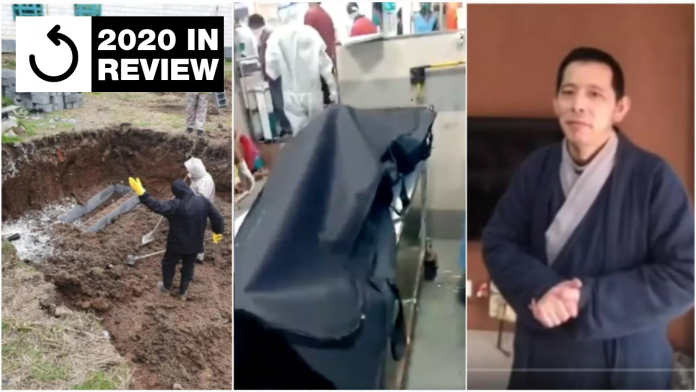 In 2020, the Covid-19 pandemic affected the daily lives of people around the world. With various locked restrictions and sanitary measures introduced around the world, amateur images shared online have illustrated the effects of the virus. Thanks to our observers, our team was able to uncover the events and phenomena that have taken place around the world, even in hard-to-reach, isolated areas.

All over the world, Covid-19 has surprised citizens and authorities. To document this outbreak, many citizens decided to film what they saw to highlight injustices or disturbing sanitation.

It all started in the Chinese city of Wuhan. During the first weeks of the crisis, our team was able to build a network of observers there.

Fangbin, a shop owner and resident of Wuhan, believed the government’s censorship of sharing photos of his city’s overcrowded hospital.

Fangbin, a store owner in Wuhan, became a whistleblower when he began documenting the Covid-19 pandemic in his city. © Fangbin / YouTube

At a time when very little information about the reality of the health situation in Wuhan reached the outside world, Fangbin told us:

I honestly knew that nothing was seriously wrong until the city was quarantined. I went to the hospital and it was full of people. It was then that I realized that Wuhan was the center of the epidemic and that hospitals were the heart of that center.

These hospitals are where the national television channels such as Hubei and the local Wuhan channels will interview people. But no one would go there. So I thought – if they do not want to go there, I’ll film what’s going on.

After publishing his videos, Fangbin was arrested and taken to the police station on February 1; he was released the next day.

Read the observers >> “Go and get an order!”: Wuhan store owner defies police over coronavirus videos

French student in quarantine in Wuhan shares his experience

Other residents of Wuhan, such as the French student Amélie Chapalain, wanted to document the daily lives of the first people who were quarantined.

Amélie Chapalain, a French student stuck in the Chinese city of Wuhan, who has been placed under quarantine due to a coronavirus outbreak, regularly posts updates on her Instagram account. © Instagram

She shared pictures of empty streets and shopping malls, as well as supermarkets flooded with shoppers who opted for quarantine. At the time, she was reluctant to return to France, thinking that “it is quite possible that in two weeks’ time everything will return to normal”. She finally returned to France in February and was quarantined with other French who returned from Wuhan.

In Guangzhou, rumors online are accusing African immigrants of a new wave of infection

When the city of Guangzhou came out of its deadlock in late March, rumors began to spread about a new wave of pollution. Some people online pointed the finger at the city’s African society and the situation escalated: African citizens were kicked out of hotels, banned from returning to their homes or even deported.

Africans living in Guangzhou, China, were thrown out or thrown out of hotels after rumors spread on Chinese social media that a second wave of COVID-19 infections originated in African society. © DR

Read the observers >> “They treat us like we are the virus”: Africans thrown out of homes in Chinese city

In Iran, authorities accused of downplaying the number of deaths

Initially, the Iranian government denied the circulation of the virus in their country, with supporters quoting “rumors” from opposition parties related to a forthcoming parliamentary election.

By March, the official death toll had reached 354, with 9,000 infected. But many testimonies and amateur videos documented a much more serious situation.

Read on observers >> Authorities in Iran “hide” COVID-19 deaths by stating other causes in death reports.

When the impact of the pandemic led to overcrowded mortuaries in Iraq in mid-March, authorities designated special sites for the virus’ victims. This soon inspired the fear of the locals who worried that the virus could be transmitted by these organs.

In September, families were able to dig up their loved ones to bury them in family plots or cemeteries closer to their homes. However, some were shocked to find that the deceased was missing or not buried in accordance with Islamic customs.

In India, patients treated next to dead bodies are treated when hospital conditions worsen

As the virus got worse, India, like many other countries, saw its hospitals overflowing with patients. In May, two videos began circulating on social media showing that patients with Covid-19 were being treated in the vicinity of deceased victims of the virus. According to a doctor at one of these hospitals, families with Covid-19 victims refused to pick up the bodies of deceased relatives for fear of catching the virus. This further increased the burden on hospital doctors, nurses and ambulance drivers.

Social media users across India were horrified by videos showing patients being treated in beds next to the bodies of Covid-19 victims at several Mumbai hospitals. © DR

In Colombia, March was marked by a wave of prison riots, as prisoners feared the spread of the virus in overcrowded conditions where social distancing and barrier gestures were impossible.

A prisoner from La Picota, a prison in Bogota, testified and sent several videos to our editorial office. He said that gloves and masks had to be “smuggled in” and that some prisoners went so far as to burn mattresses and clothes or organize escape attempts.

Migrants in Niger protest against the conditions of the quarantine camp

Sub-Saharan African migrants kicked out of Algeria in April awaited repatriation in a quarantine camp in northern Niger. Place during a lockdown for more than three weeks, a group of desperate migrants protested and broke down the door of a store and stole goods. One of our observers, a migrant in the camp, described the conditions as “unbearable” and said that many were still wearing the dirty clothes they had entered and that no officials had come to see them.

Lockdown orders have had a devastating effect on sub-Saharan African migrants who were kicked out of Algeria and have been living in camps in the border town of Arlit, Niger. © DR

Migrant workers living in a center of the Paris suburbs sounded the alarm in unsatisfactory living conditions and shared pictures and videos of dirty cramped spaces with us. The migrants and asylum seekers reported desperately trying to isolate themselves, even though they only lived at 7 m². Residents also had to share common areas such as kitchens and bathrooms with their neighbors. “When Covid-19 struck, I realized that it would be impossible to exercise locking in the center,” said one of our observers, who decided to leave the center before two residents died of Covid-19.

These photos and videos were taken by residents of a French center for migrants run by Adoma in April and May 2020. © DR

The victims of both the pandemic and the economic crisis, Venezuelans reluctantly return home

The lock-in measures to combat the pandemic adopted by many South American countries in March had serious economic consequences. Many migrant workers, especially Venezuelans, lost their jobs and were forced to return to their homeland, even in the midst of a severe economic crisis.

Our team was able to meet three of them to understand why so many Venezuelans – more than 40,000 according to government estimates – decided to make the long journey home.

Read about the observers >> By bus or on foot: the long road home for Venezuelans stuck abroad during the pandemic