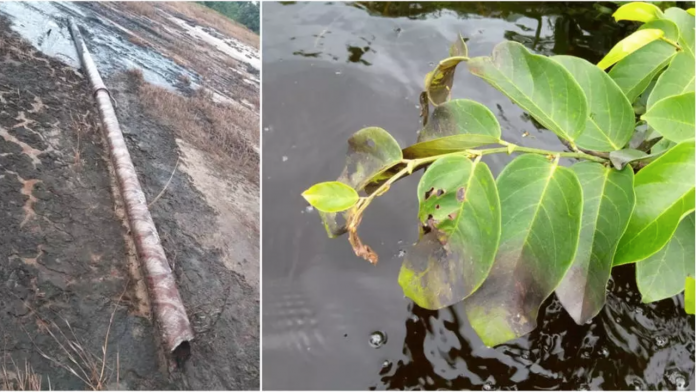 Residents of Étimboué in western Gabon have encountered several oil spills over the past two years. Exhausted and angry, they speak out against Perenco, an independent Franco-French oil company headquartered in Paris and London, which currently extracts gasoline from about fifty different oil fields in the area. Locals report that Perenco’s equipment is poorly maintained and out of date and likely to cause spillage. This pollution has had far-reaching effects on the local population, including health problems, water pollution, poisoned crops and fish, our observers say.

In Gabon, the petrol sector is the largest contributor to GDP and represents over 20% of revenues, according to the World Bank. Most of the country’s fuel reserves – estimated at about two billion barrels – are concentrated in the area south of Port Gentil. A number of different oil companies have operated in the region since 1956.

This area is also home to more than 5,700 people, most of whom live fishing in the nearby Lake Nkomi.

A group of locals only spoke in October 2020 about the growing problem of pollution in the region. They pointed the finger at Perenco, which extracts 95,000 barrels a day in this area alone, according to its own figures.

“The old pipelines, which were installed about 40 years ago, are constantly developing holes”

Lydie Rebela is a 55-year-old farmer who has lived in the neighboring village of Batanga for the past 30 years.

There have been oil spills all over the area in recent years. The oil spreads during the rainy season, when the polluted areas flood and the water carries all kinds of toxic materials everywhere. My crops are less productive every year. For example, I need about 50% more water to make them grow than two years ago.

Emissions usually occur due to the old pipelines, which were installed about 40 years ago and which are constantly developing holes.

Some of the pipelines are under water, others are underground. Some are even above ground. There are also very old oil wells, which are in poor condition, and they leak and cause spills as well.

Residents of Étimboué say that this pipeline, which is old and in poor condition, leaked oil. © Facebook The so-called Christmas tree, which is used to regulate the pipe flow in an oil well, is located right next to an area that has become very polluted. This video was filmed in 2020 by Bernard Christian Rekoula. © Video by Bernard Christian Rekoula “Younger children here have difficulty breathing, especially asthma”

I have lived here for the last 30 years and there has always been pollution, but it has gotten much worse in recent years. We use sea water to wash and cook but it is polluted both upstream and downstream from the village, which means we can not drink it.

We have also noticed more and more breathing problems among our younger children [Editor’s note: To date, no scientific study has examined this issue], especially asthma, but we are not able to get these children the treatment they need. I have noticed a difference when I go to Port-Gentil; I breathe better there.

The deteriorating pollution in recent months has been the last straw for us.

Thirty-two-year-old Yves Onanga used to work for Perenco. Now he’s a fisherman. He said the company’s behavior has driven people over the edge.

It is true that the recent serious incidents have made us all worried, but what has really got us into arms is Perenco’s reaction. They have not carried out the clean-up properly and do not plan to pay any damages to the residents affected by the spill.

In this video, several local people visit a site that should have been cleaned by Perenco. When they pull back the branches, they see that the trees and their roots are covered with a black substance that they say is crude oil.

The water is polluted and fishermen as we discover that there are fewer and fewer fish. In 2012, the lake became extremely polluted and we found a lot of dead fish floating on the surface. Ever since, it is as if the fish have fled the area. Previously, we could easily fish for eight kilos in a single day, but now we are struggling to get two or three kilos in.

Dead fish washed up on the river bank, published on Facebook in March 2019. Our observer says that this is a common sight in the area. (Photo: Gabon Vision 2.0 Official)

It’s not just leaks. There are also all industrial plants that emit gas. There is a facility near the bridge [Editor’s note: north of Lake Nkomi] where they have flat stacks used to burn flammable gas. It pollutes the air, which then has a negative effect on our health and the environment.

This is the flare stack site CB1. It is located north of Lake Nkoni in the department of Étimboué. © Bernard Christian Rekoula

These images show the location near the bridge where gas is burned and then released back into the air. The process, called gas flaring, creates a lot of pollutants. It is a way to get rid of the gas that is extracted next to the gasoline.

If you look at satellite images of the area, you can see a certain area that is visibly polluted by this facility. There are tree trunks on the ground and areas colored purple and black.

Activist George Mpaga is the coordinator of an organization called ROLBG, a French acronym meaning Free Network of Organizations for the Good Governance of Gabon. Mpaga says he is also concerned about the effects of the pollution on the animals living in the area, including antelopes, crocodiles and turtles. He is also worried about the fish, whose traits are diminishing.

“Officials tend to close their eyes to the problem”

Journalist and activist Bernard Christian Rekoula traveled to the area in October to film the damage caused by the oil spills in an attempt to raise awareness of the situation. He published his film on Facebook on November 7.

Total was the first company to drill and extract gasoline in the area before it was sold to Perenco 2018. The structures at these sites are old and have not been properly maintained.

These black leaves are just one example of damage caused by oil spills. This photo was taken in November 2020. © locals in Étimboué

Officials tend to just close their eyes to the problem. So do many of the national media. There are only a few independent websites that have published testimonials and complaints from locals living in this area. That’s why I wanted to capture the extent of the damage to the camera.

This is the land of the ancestors. People have lived here since long before independence [Editor’s note: in 1960]. Some people have left due to pollution but most want to stay. They believe that Perenco is making the situation worse for them to leave.

Perenco, which has an important presence across the African continent, is the primary producer of crude oil in Gabon and the second largest French oil company after Total.

The company, which specializes in optimizing mature oil feed, is often described in the media as an opaque organization with close ties to the Gabonese government. Perenco does not disclose its annual revenue or its internal governance structure. It has also been mentioned in several investigations by independent media on corruption issues.

Our team contacted Perenco by email but they did not respond to our request for an interview. We will update this page with their answers if they respond.