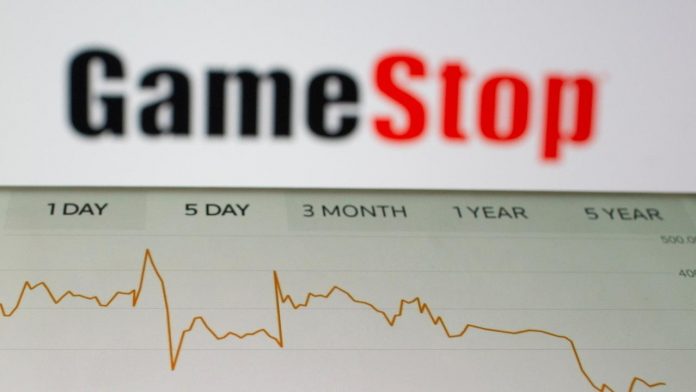 GameStop shares plunged 60% on Tuesday in a further reversal of the latest blockbuster gains that caught people’s attention far beyond Wall Street.

The video game retailer’s stock skyrocketed 1600% in January after a social media campaign to raise the price at the expense of large Wall Street funds that invested in a downturn. The dramatic increase, with little to do with investing fundamentally, encouraged warnings that things could turn around just as quickly.

GameStop shares fell between $ 135 and $ 90. The 60% fall was the worst so far for the stock and follows a decline of 31% a day earlier. The stock had risen as high as $ 483 last Thursday, well above the $ 17 it received at the beginning of the year. The sudden fainting this week may make some investors’ hopes of earning big.

“These things can last longer than people expect, but when they unwind, they can unwind pretty quickly,” said Ross Mayfield, investment strategist at Baird. “When there is complete speculation mania and games, someone will be left in the bag.”

The extreme movements in GameStop have been driven by a frenzy of speculative trading and seem to have little to do with the actual prospects of the company, which has lost money consistently.

The business model for the mall-based retailer of physical copies of video games has taken off as fewer people shop in malls and more and more people pick up video games instead of buying them in stores. This led to some large financial institutions “shortening” the share or investing in the price falling.

Investors on Reddit and other social media portals have gathered in recent weeks to capture shares of GameStop, AMC and other fighters. Some of the institutions that thought the shares would fall have now admitted defeat and moved away from these investments in a fantastic reverse financial power on Wall Street.

The number of GameStop shares that have been short-circuited (investments that the share will fall) has decreased by more than half in recent days, according to a report on Monday by the analysis company S3 Partners.

When GameStop’s shares fell on Tuesday, its followers on Reddit received some encouragement from Mark Cuban, the entrepreneur and owner of the Dallas Mavericks.

“No disruption is easy or in a straight line,” the Cuban said in an “Ask Me Anything” discussion on Reddit’s WallStreetBets. “Stay with it. I’m a believer. ”

He said he does not own any GameStop shares, but said that smaller traders do for their shares is the same thing that professional investors have long done to each other on Wall Street.

But now, instead of a hedge fund manager trying to pressure another who had built up large investments that the share price would fall, it is smaller investors who communicate via the internet and make the direction.

“What I love about this now is that if you choose your places right and work as a group, you can strike again and again,” he said in the forum.

Many posts on WallStreetBets, where users have encouraged each other to buy shares in GameStop and other shares, urged their traders on Tuesday to resist the temptation to sell.

“In a week we will be full that we have these so cheap!” reasoned a Redditor. Another boasted, “I just bought three more shares because of the case. Let’s go! Hold!”

The sale did not intimidate a Redditor, who declared “Down $ 68 but HOLD.”

Next to GameStop, which is based in Grapevine, Texas, also fell the proportions of online audience favorites. AMC Entertainment fell 41%, headphone maker Koss Corp slipped 43% and BlackBerry fell 21%. Meanwhile, the S&P 500 index closed up 1.4%.